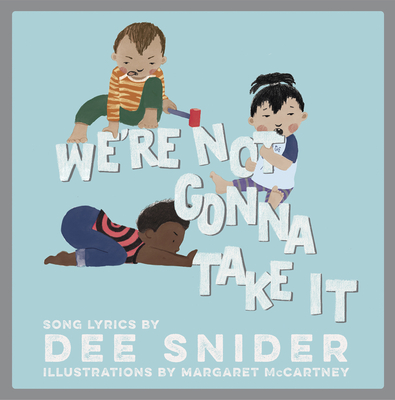 We're Not Gonna Take It (Hardcover)

While he is perhaps best known as the lead singer and songwriter of the '80s sensation Twisted Sister, there is so much more to Dee Snider. He has starred in several reality TV shows and has been a frequent host on MTV. His own nationally syndicated radio show House of Hair will soon celebrate twenty-five years on over 200 stations in North America. As a voiceover artist, he can be heard in many radio and TV commercials, animated shows, and documentaries. He also served a yearlong stint as the voice of MSNBC. Dee wrote, produced, and starred in Dee Snider's StrangeLand, which has become a cult classic that helped create the torture film subgenre. StrangeLand 2 is currently under development. On the small screen, Dee played himself in the VH1 original film, Warning: Parental Advisory, recreating his role during the 1985 congressional record labeling hearings. Dee, along with Frank Zappa and John Denver, famously turned DC politics upside down by carrying a banner of Dee's Twisted Sister legendary anthem, "We're Not Gonna Take It," at the hearings. During his run to become governor of California, Arnold Schwarzenegger asked Dee to lead the way in singing "We're Not Gonna Take It" at a campaign stop on the steps of the California State Capitol building in Sacramento. The Mexican government recruited Dee as well, using both him and the anthem in an "antidishonesty" campaign to gain attention on their bid to set the country on a judicial road to recovery. His starring role on Broadway in the hit musical Rock of Ages generated national interest, culminating in a spot on Late Night with Jimmy Fallon, where Dee guested with the Roots and Jimmy on Dee's self-penned hit, "I Wanna Rock." His autobiography, Shut Up and Give Me the Mic, was released in the summer of 2012 by Gallery Books/Simon & Schuster to critical acclaim, coinciding with Warner Bros. Pictures' release of Rock of Ages, which features two of Dee's biggest hits. Dee's hit songwriting credits extend to many genres of music and have been covered by major artists the world over. Following his critically acclaimed album Dee Does Broadway, Snider's Broadway connection has continued to grow. Dee Snider's Rock & Roll Christmas Tale (lyrics, music, and book by Dee Snider) completed highly successful runs in Chicago and Toronto. His producer credits extend to the off-Broadway hit ensemble, the Puppet Shakespeare Players, and the international award-winning short film, Fool's Day. In 2014, Dee was the recipient of the prestigious Harry Chapin Memorial Humanitarian Award for his charitable work spanning several decades. Most notably, Dee spent twelve years as the national spokesman and grand marshal of the March of Dimes Bikers for Babies initiative (for whom he raised $325,000 with his Celebrity Apprentice win), established his annual Ride to Fight Hunger for Long Island Cares, and donated his gold and platinum album awards to Broadway Cares for auction. On May 20, 2016, Dee took part in the unveiling of the new Rock & Roll Hall of Fame exhibit, Louder Than Words: Rock, Power & Politics, which was on display in Cleveland, OH, during the 2016 Republican National Convention. To commemorate the exhibit, Dee performed a new acoustic version of his legendary song, "We're Not Gonna Take It." This moving new version of Dee's epic anthem is featured on his new album, We Are the Ones, released on Red River Entertainment in North America and Ear Music internationally. A lightning rod for controversy, Dee rocked the 1985 Senate hearing instigated by the Parents Music Resource Center (PMRC), and his historic involvement remains relevant to rock music and politics today. In April 2016, Dee was called back to Capitol Hill to speak on behalf of the GRAMMY Foundation's Fair Play Fair Pay Act. This time, they were pleased to see him! In the summer of 2016, Dee and Twisted Sister set out on a farewell tour that drew well over a million fans to their headline festival shows in the United States and Europe. 2017 saw Dee touring the world performing solo shows as his production company Twisted Storm continued to develop several movies and television shows. He also traveled to North Dakota to shoot a video that highlighted the Native American struggle to maintain their dignity in the face of unjust corporate pipeline encroachments that threaten the ecology and environment of their sovereign land. Dee is currently at work on his first novel. Margaret McCartney (illustrator) grew up in Washington, DC, where she played flute in the Police Boys & Girls Club Band and guitar in a band called Tuscadero. She has met both Bill Clinton and Jimmy Walker. She studied illustration at the Rhode Island School of Design. Her work has appeared on everything from garden gloves to comics to her own line of children's wear, Winter Water Factory. She lives and works in Brooklyn, New York. She enjoys fiction and dumplings. Her crimes include wrecking a moped in Thailand and opening for Cheap Trick.
or support indie stores by buying on
Copyright © 2020 American Booksellers Association