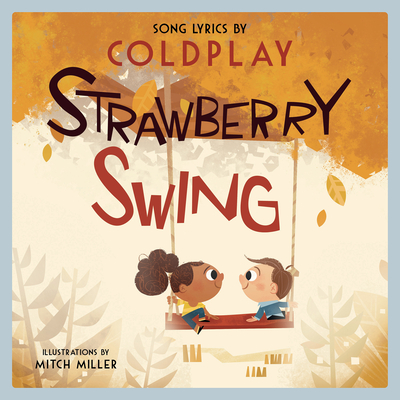 I remember
We were walking up to strawberry swing
I can't wait till the morning
Wouldn't wanna change a thing...

Strawberry Swing is a tenderly illustrated picture book of one of Coldplay's best known songs. It was the fifth single released from their hit album Viva la Vida, and gained widespread acclaim for its accompanying stop-motion animation music video.

With lyrics by Coldplay and illustrations by Mitch Miller, Strawberry Swing tells a sweet story of friendship, encapsulating the innocence, fun, and struggle of finding someone special--and wanting to share every moment with them. The book provides an excellent opportunity to introduce Coldplay's irresistible melodies to children who will delight in both the music and the message.

Coldplay are a British rock band that formed in 1996, and have since sold over 100 million records and won numerous accolades including seven GRAMMY Awards, nine BRIT Awards, and seven Billboard Music Awards. The band consists of five members--Chris Martin, Jonny Buckland, Guy Berryman, Will Champion, and creative director Phil Harvey. They rose to fame when they released their hit song "Yellow" in 2000, and their song "The Scientist" was named as one of the "100 Greatest Songs of the Century" by Rolling Stone. The band continues to produce music that tops charts worldwide. Mitch Miller is an illustrator and visual development artist. He has created work for companies including Yahoo! and Cricket Media. Miller lives in Pennsylvania with his border collie, Willem.
Loading...
or support indie stores by buying on