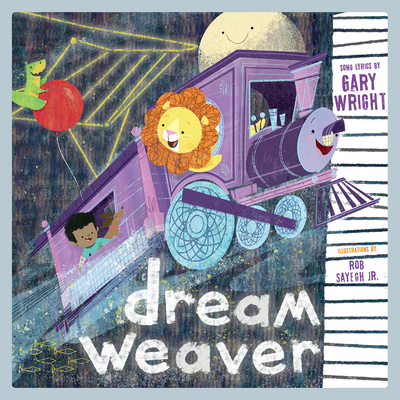 Gary Wright's hit song is reimagined as a fantastical picture book to delight dreamers of all ages.

Dream Weaver is a vibrantly illustrated picture book based on Gary Wright's 1975 breakout single from his platinum-selling album The Dream Weaver, which has sold over two million copies. Dream Weaver peaked at #2 on Billboard's Hot 100 chart and reached #1 in Canada. The song's popularity continued long after its release, and in 1991, Wright recorded a new version for the Wayne's World soundtrack; the soundtrack reached #1 on Billboard's soundtrack album chart and also sold over two million copies. Dream Weaver continues to appear in films and TV shows to this day.

With lyrics by Gary Wright and illustrations by Rob Sayegh Jr., this magical picture book follows a little boy's dream of a train that takes him all the way to the moon. Poised to become a bedtime classic, Dream Weaver is the perfect opportunity for parents to share this timeless song and will surely spark the imaginations of young and old alike.

Gary Wright is an American singer-songwriter, best known for his multiplatinum hits Dream Weaver and Love Is Alive. Before his solo album The Dream Weaver was released in 1975, Wright played in the London music scene with the heavy rock band Spooky Tooth and also collaborated with both George Harrison and Ringo Starr. The Dream Weaver was certified platinum, with its hit single Dream Weaver reaching #2 on the Billboard Hot 100 chart. Wright continues to perform live as a solo act, as well as with both Spooky Tooth and Ringo Starr's All-Starr Band. His autobiography, Dream Weaver: Music, Meditation, and My Friendship with George Harrison, was published in 2014. Rob Sayegh Jr. is an author and illustrator who loves creating playful worlds with funny characters to make families giggle together. He is a professional snack taste-tester, falls in love with every dog he meets, and enjoys finding and creating new textures for his artwork. Sayegh has spent most of his life designing toys to encourage kids to constantly play, learn, and imagine new possibilities. He currently lives with his family in San Francisco, California. To see more of Sayegh's work, visit: www.robsayart.com
Loading...
or support indie stores by buying on