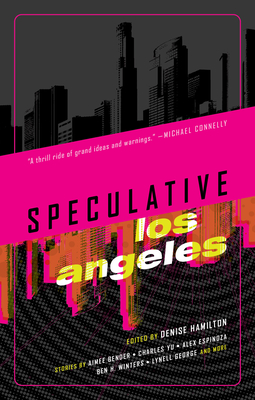 "A stimulating anthology of 14 futuristic L.A. fables...Some of the best of these tales seem illumined by the humanistic spirit of the late Ray Bradbury, poet laureate of Southern California fantasy literature."
--Wall Street Journal

" Speculative Los Angeles] is a swath of tales that are both wildly imaginative and emotionally grounded, speculations that not only imagine our possible futures but illuminate the collective anxieties of our unsettled and unsettling present."
--Los Angeles Times

"Speculative Los Angeles is a thrill ride of grand ideas and warnings. Take a place that already defines the future of culture, add fourteen unbound minds, and you get a collection that wows the imagination like no other."
--Michael Connelly, author of the best-selling Harry Bosch series

"The problem of buying books for others can be solved by offering the equivalent of the literary box of chocolates: the anthology...For Californians, or people who just like the West Coast, there's Speculative Los Angeles, edited by Denise Hamilton."
--Washington Post, recommended by Silvia Moreno-Garcia

"Speculative Los Angeles is a new venture from Akashic Books, which has published an impressive series of original anthologies of noir fiction centered on various cities. This is the first in a series doing the same thing for speculative fiction, beginning with LA."
--Locus Magazine

"14 outstanding stories of weird and uncanny happenings in the City of Angels...Each story presents a fresh take on the magic and strangeness of L.A. past, present, and future, and the characters are representative of the diverse region, caught in situations ranging from surreal to chilling. Readers should snap this up."
--Publishers Weekly, Starred review, Pick of the Week

As an incubator of the future, Los Angeles has long mesmerized writers from Aldous Huxley to Octavia E. Butler. With its natural disasters, Hollywood artifice, staggering wealth and poverty, and urban sprawl, one can argue that Los Angeles is already so weird, surreal, irrational, and mythic that any fiction emerging from this place should be considered speculative. So, bestselling author Denise Hamilton commissioned fourteen stories (including one of her own) and did exactly that. In Speculative Los Angeles, some of the city's most prophetic and diverse voices reimagine the metropolis in very different ways.

As with our city-based Akashic Noir Series, each story in Speculative Los Angeles is set in a distinct neighborhood filled with local color, landmarks, and flavor. Since the best speculative fiction provides a wormhole into other worlds while also commenting on our own, that is exactly what you'll find here.

Edgar Award finalist Denise Hamilton is the author of seven crime novels and the editor of the best-selling anthology Los Angeles Noir (which includes the Edgar Award-winning short story The Golden Gopher by Susan Straight) and Los Angeles Noir 2: The Classics. She is a former Los Angeles Times journalist, a Fulbright Scholar, a noir and sci-fi/fantasy geek, and a proud LA native who refuses to speak only in English.
Loading...
or support indie stores by buying on