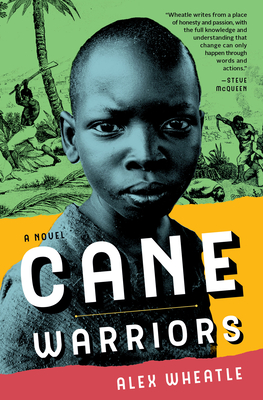 Nobody free till everybody free.

Moa, a fourteen-year-old slave, gets caught up in the most significant slave rebellion in Jamaican history, paying homage to freedom fighters all over the world.

Wheatle brings the struggle of slavery in the Jamaican sugar cane fields to life...A refreshing and heartbreaking story that depicts both a real-life uprising against oppression and the innate desire to be free. Highly recommended.
--School Library Journal, STARRED review

Alex Wheatle departs from his award-winning contemporary novels for a superb foray into historical fiction...Wheatle's characteristic kennings and coinages...heighten this intense, affecting story of courage, bloodshed and commitment to freedom at all costs.
--The Guardian (UK)

Cane Warriors centers the voice of the enslaved rather than white abolitionists. In this way, readers face the reality of enslaved people who fought for their own freedom.
--Worlds of Words

I read it in one sitting. I simply could not put it down. Cane Warriors is such a powerful narrative of trauma and triumph...Wheatle celebrates the heroism that Tacky inspires. He tells the riveting story of 14-year-old Moa who bravely joins Tacky's army.
--The Gleaner (Jamaica), recommended by Carolyn Cooper

Set in 1760, Cane Warriors, the latest young adult novel by Alex Wheatle, is a fictional account of a key but often overlooked event in Jamaican history: Tacky's Rebellion, a major revolt by enslaved Africans, planned via an island-wide conspiracy. In Wheatle's narrative, a 14-year-old named Moa is caught up in the growing revolt, driven by a fierce desire for freedom and self-determination.
--Saturday Express (Trinidad & Tobago)

Tension-filled and heart-stopping, a work of edgy brilliance that brims with existential fervor...Excellent.
--Kaieteur News (Guyana)

This is a harrowing young adult novel; still, it is based on true history, and the story needs to be told. The brave freedom fighters of Tacky's Rebellion should be remembered and honored...Recommended.
--Historical Novels Review

Alex Wheatle writes from a place of honesty and passion, with the full knowledge and understanding that change can only happen through words and actions.
--Steve McQueen, Academy Award-winning film director

Moa is fourteen. The only life he has ever known is toiling on the Frontier sugarcane plantation for endless hot days, fearing the vicious whips of the overseers. Then one night he learns of an uprising, led by the charismatic Tacky. Moa is to be a cane warrior, and fight for the freedom of all the enslaved people in the nearby plantations. But before they can escape, Moa and his friend Keverton must face their first great task: to kill their overseer, Misser Donaldson. Time is ticking as the day of the uprising approaches . . .

Alex Wheatle is the author of several best-selling books including the young adult novel Home Girl, the modern classic Brixton Rock, and the multiaward-winning Crongton series. Wheatle's body of work is a finalist for the 2021 NSK Neustadt Prize for Children's Literature has won numerous awards, including the Guardian Children's Fiction Prize. He lives in South London.
Loading...
or support indie stores by buying on
(This book is on backorder)