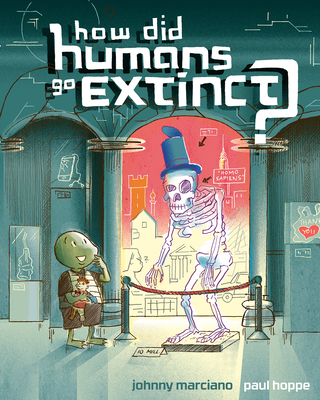 How Did Humans Go Extinct?

Plib is like every other N rfbl k kid on Earth, except for one thing.

Only one thing about the humans bothers Plib. What happened to them all? Did they turn the planet into an uninhabitable wasteland? Or did they turn on each other? Or did the humans die out because of something else they did--or didn't--do?

Find the answer in How Did Humans Go Extinct?

Paul Hoppe has illustrated various children's books, including Good Vibrations (song lyrics by Mike Love and Brian Wilson), Neymar: A Soccer Dream Come True, and The Woods, which he also wrote. His work has appeared in publications such as the New Yorker, the Wall Street Journal, and the New York Times. During the summer, Hoppe teaches sequential art at the School of Visual Arts. His work has been honored by the Society of Illustrators, Communication Arts, and American Illustration, among others. Originally from Poland and raised in Germany, Hoppe works from a shared studio in the Pencil Factory in Brooklyn, and lives in Queen
Loading...
or support indie stores by buying on