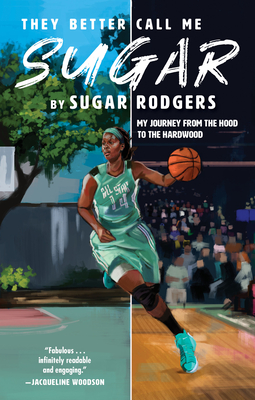 "They Better Call Me Sugar is fabulous--so infinitely readable and engaging. Sugar Rodgers is such a clear-eyed and thoughtful writer and a huge inspiration. There are so many young people I can't wait to give this book to."
--Jacqueline Woodson, author of Brown Girl Dreaming, former National Ambassador for Young People's Literature

"If it is one thing many of us have been doing a lot lately is spending more time curling up with favorite books of ours. Our book games have been strong lately and that is always a positive. Here is a very athletic way to heighten that need for read--add a dash of Sugar to your bookshelves."
--Beyond the W

"Rodgers wrote the book for her younger self, but the book is perfect for young readers, starting in middle school, and also young athletes. Rodgers' goal is to use her toughest moments to inspire those who read it."
--The Black Sportswoman

"In her inspiring and candid debut memoir, WNBA star Sugar Rodgers opens up about her challenging youth and her path to college, a successful career and a fulfilling, empowered life."
--Ms. Magazine

"Rodgers' memoir...personally details a young girl growing up in dire poverty in Suffolk, Va., who lost her mother when she was a teenager, saw both of her siblings go in and out of prison, and witnessed shootings in her neighborhood. Yet she kept on striving."
--Minnesota Spokesman-Recorder

"Describing her upbringing under less-than-ideal conditions in Suffolk, Sugar's book] has gotten some quality reviews."
--Virginian-Pilot