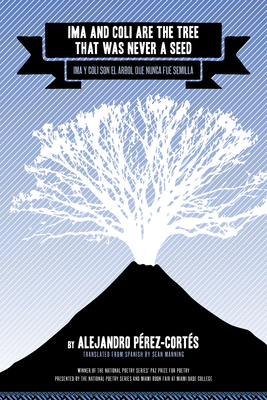 Ima and Coli Are the Tree That Was Never a Seed

The new winner of the Paz Prize for Poetry, granted by the National Poetry Series, is the author's impressionistic homage to his hometown of Colima, Mexico.

"In this remarkable bilingual debut...P rez-Cort's cracks open the name of his hometown, Colima, to generate a vast mythology...The side-by-side presentation of the original Spanish and its English translation adds another layer to this engrossing volume."
--Booklist

Ima and Coli Are the Tree That Was Never a Seed is Alejandro P rez-Cort s's personal genesis of Colima, Mexico, published here in both English and Spanish. The tree is an element/character in the book that appears and disappears throughout. Some poems are set in an ancient pre-Hispanic Colima; others reflect the reality of a modern-day Colima, sadly stigmatized and eroded by violence perpetrated by the narcos.

In his introduction, preeminent Cuban poet Jos Kozer praises P rez-Cort s: "Ima and Coli Are the Tree That Was Never a Seed comprises a voice that I consider poetic and that should be cared for and listened to with true interest. A voice that encompasses all, one that seeks to integrate, remake, and modify normative language when necessary, and to distort language that allows a better perception of the present and of everything that is historically behind a contemporary poet."

The Paz Prize for Poetry is presented by the National Poetry Series and Miami Book Fair at Miami Dade College and is awarded biennially. Named in the spirit of the late Nobel Prize-winning poet Octavio Paz, it honors a previously unpublished book of poetry written originally in Spanish by an American resident.