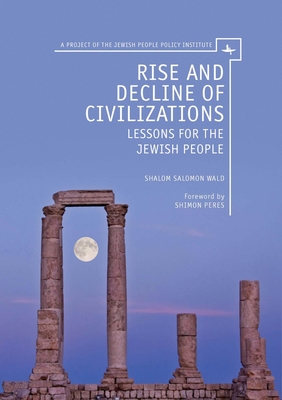 Rise and Decline of Civilizations

Lessons for the Jewish People

Rise and Decline of Civilizations: Lessons for the Jewish People is a thought experiment in which the author examines the work of 23 historians of the last 2,400 years, from Thucydides to Jared Diamond, who describe the rise and decline of nations and civilizations. None of these is a historian of Judaism. The key question of the book is whether the reasons that explain the rise, decline, and fall of other civilizations could apply to the Jews as well. The answer of the author is a qualified yes. From the work of these historians he extracts 12 "drivers," or factors that explain rise and decline, from religion to natural catastrophes. Reviewing the Jewish history of more than 3,000 years against the background of these drivers opens fascinating new vistas for the general reader, and may be particularly useful to historians and politicians.

Shalom Salomon Wald is a Senior Fellow at the Jewish People Policy Institute (JPPI) in Jerusalem, specializing in the history of Jewish civilization, Israeli S&T policy, and Jewish-Israeli links with China and India. Dr. Wald's wide-ranging research interests include economics, sociology, history, and the history of religion and philosophy. His PhD thesis on the sociologist-historian Alfred Weber received the University of Basle's prize as the best thesis in the social sciences in 1962. From 1964 to 2001, Dr. Wald served at the OECD Paris, the West's biggest policy think-tank and advisory body, as an educational, science and technology expert, and as the co-founder and head of the OECD-DSTI Biotechnology Unit, authoring numerous OECD papers and publications (his last before retiring: Biotechnology and Healthy Aging). He joined the JPPI in 2002.
Loading...
or support indie stores by buying on