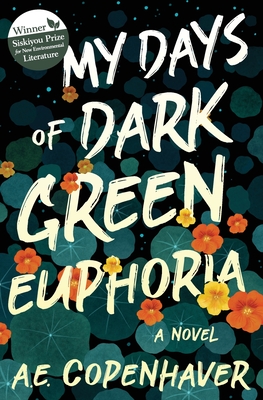 My Days of Dark Green Euphoria

Love, lies, and eco-anxiety - an irresistible satire about finding balance in a chaotic world

Thirtysomething Cara Foster is, one might say, eco-anxious-perhaps even eco-neurotic. She eats out of dumpsters (not because she wants to but because it's the right thing to do), does laundry as seldom as possible, takes navy showers every couple of days, and is reevaluating her boyfriend for killing a spider instead of saving a life.

Cara has never met her six (soon to be seven) nephews and nieces because she doesn't fly domestic (unless it's an emergency) or international (ever). She longs for a carbon footprint so light you'd hardly know she exists.

Then, during a mimosa-soaked Sunday brunch, she meets her boyfriend's alluring mother, Millie, and Cara finds herself mesmerized. Millie represents everything Cara's against: She eats meat, has cowhide rugs, drives a car the size of a small yacht, and blithely travels the world by boat, plane, and train-without any guilt whatsoever. In fact, Cara soon admits this may be why she finds herself so drawn to Millie. As they begin spending time together, getting pedicures and drinking sixteen-olive martinis, Cara becomes hooked on Millie and this new freedom from the harsh realities of life in the twenty-first century.

Yet before long, Cara risks losing everything to be close to the mundane extravagance of Millie's world-her career, her best friend, and her identity all hang in the balance as she struggles to disentangle from this intoxicating muse.

Irreverent, witty, and provocative, My Days of Dark Green Euphoria-winner of the Siskiyou Prize for New Environmental Literature-is a satirical novel of how a life on the edge of eco-anxiety can spiral wildly out of control, as well as how promising and inspiring a commitment to saving our planet can be.