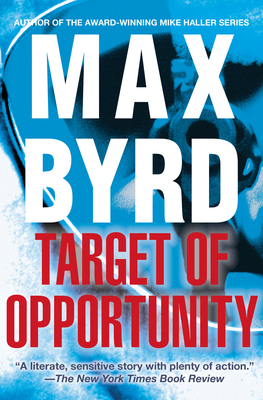 Bestselling author Max Byrd delivers a brilliant, revenge-filled tale of a WWII Police Inspector, who trails his vengeful sister-in-law after her husband's death. On a relaxing vacation at Lake Tahoe, San Francisco Police Inspector Gilman and his brother-in-law, former Washington attorney Donald Kerwin, stop into a 7-Eleven--and are met with a torrent of bullets. A gunman at the register kills Kerwin and wounds Gilman, and an illegal police search follows, leading to a dismissal of charges against the suspect. Gilman's sister-in-law Nina is not only heavily distraught over her husband's death but violently outraged at the illegal search. When she learns that the killer is returning to Boston, she trails him, out for revenge, leaving Gilman racing against time to stop her. Masterfully weaving history, plot, and emotion, Target of Opportunity is an unforgettable achievement.