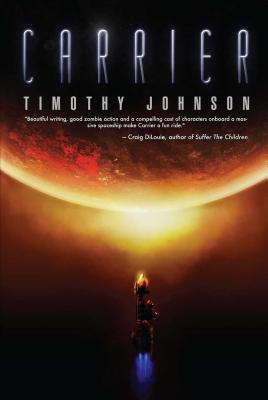 With Earth's resources on the verge of exhaustion and worldwide civil war imminent, the stars were looked to for answers. Beneath the surface of lifeless planets were found all the resources that could ever be consumed.

Stellan Lund is chief security officer aboard the carrier Atlas. Life on a carrier is peaceful—as long as the crew does its job, the New Earth Council leaves them alone. The only risk is an occasional case of black madness, a mental-break condition that turns its hosts into violent, insane murderers—but it's a small chance to take for some freedom.

Then the Atlas is ordered to a dying planet where an unknown material awaits. When an accident exposes some of the crew to the alien substance, reports of black madness escalate—but something about these cases is different.

And if the ship's crew can’t eradicate the infection no one will make it home.

Timothy Johnson is a writer and editor. He has an English degree from Virginia Tech, where he won the Fiction Award for his graduating class. He is a member of the Horror Writers Association. Carrier is his first novel. He lives in Rockville, Maryland with his wife and his dog.
Loading...
or
Not Currently Available for Direct Purchase