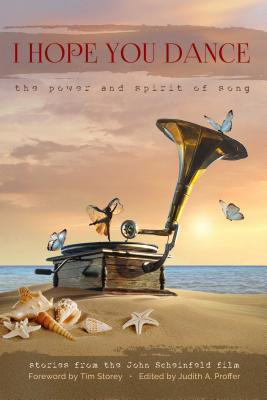 I Hope You Dance

The Power and Spirit of Song

What Does It Take To Hope? Everything.

When Nashville songwriters Mark D. Sanders and Tia Sillers composed I Hope You Dance, they unleashed a breathtaking piece of music for the ages that would go on to win coveted awards and grateful hearts.

A phenomenon in the music industry in 2000 and named one of the Songs of The Century, the Lee Ann Womack recording has been at the top of graduation and wedding playlists for over a decade. It has become an anthem for hope and survivorship. It has been embraced both as celebration and comfort. It was even performed at poet Maya Angelou's memorial.

In his tender film, acclaimed director John Scheinfeld (U.S. vs. John Lennon) explores the power of one song to impact lives in a profound, meaningful and sometimes startling ways.

Curated from the stories seen in the film, Co-Producer Judith A. Proffer documents the birth and life of the song I Hope You Dance, including four captivating real life stories of faith and hope.  A homeless woman who finds refuge in dance. A quadriplegic whose faith restores her spirit and physical being. A father who navigates a parent's worst nightmare. And a reluctant bride who ultimately finds her way to joy. Featuring thoughtful commentary by Joel Osteen, Brian Wilson, Vince Gill, Lee Ann Womack and Graham Nash with a foreword by Tim Storey.

I Hope You Dance: The Power of Spirit and Song is a wondrous look at the possibilities that await when, given the chance to sit it out or dance, we choose to dance.

Judith A. Proffer is the Co-Producer of the film I Hope You Dance: The Power and Spirit of Song. Former publisher of LA Weekly and OC Weekly, she co-wrote the award-winning end title song "The Art of the Soul" for the Sundance Channel documentary As Seen Through These Eyes. She is the founder of the boutique book publishing companies Huqua Press and Padaro Press. She lives in Southern California and is married to music and media producer, Spencer Proffer.
Loading...
or
Not Currently Available for Direct Purchase