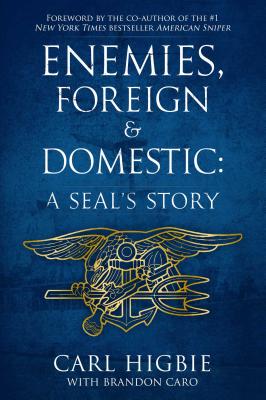 As seen on The Kelly File with Megyn Kelly.

Carl Higbie was a member of the the Navy Seal team that captured the Butcher of Fallujah, only to later be accused of prisoner abuse.

Carl Higbie was on the Navy Seal assault team that captured the most wanted man in the Middle East–the Butcher of Fallujah, Ahmed Hashim Abd Al-Isawi. But instead of receiving the hero's welcome the SEALs deserved, they were charged with prisoner abuse after Al-Isawi alleged they'd beaten him up. Carl Higbie was a witness for their defense at the courts martial. When he went public with his account of what happened, the Navy fought him tooth and nail. But Higbie fought back–and he won.

Carl Higbie was a Special Operator with SEAL Team Ten, Echo Platoon. He deployed twice in support of Operation Iraqi Freedom. Carl published his first memoir, Battle on the Homefront shortly after his second deployment. He is a regular contributor on Fox News. Higbie ran for Connecticut's 4th Congressional District in 2014. He resides in Greenwich, CT.

Brandon Caro was a Navy corpsman (combat medic) who deployed to Afghanistan in support of Operation Enduring Freedom in 2006-2007. His first novel, Old Silk Road, was published by Post Hill Press. His work has been featured in The New York Times, The Daily Beast, WhiteHot Magazine, and others. He resides in Austin, TX.

Praise For Enemies, Foreign and Domestic: A SEAL's Story…

"Carl Higbie did something for me I could never know for myself, he exemplifies the character of what it takes to become and thrive as a Navy Seal. His story reveals to me how lucky we are to have people like Carl on our side willing to sacrifice all for our country abroad and at home."
— Brian Kilmeade, New York Times bestselling author and co-host of Fox and Friends

"A true David and Goliath story, this is Carl’s ultimate triumph over a politically motivated group of military leaders who forgot what they swore to uphold—the Constitution. This is a testament to the freedoms our patriots fought for and what can make us great again. The youth of America should read this sooner rather than later.”
— Lt. General Paul Vallely (retired)
or
Not Currently Available for Direct Purchase
Copyright © 2020 American Booksellers Association