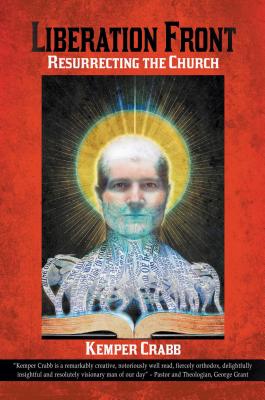 The Church is Heaven’s Colony on Earth.

The Church is searching for a foundation and definition of purpose. Christian believers worldwide struggle to find their mission amidst a culture torn with moral controversy—shattered by its own failures. Time honored traditions are quickly fading into history. How can this world-weary community raise their vision to become world-changers?

Liberation Front answers these core questions with biblical clarity and hope. It is a timeless message that gives a triumphant context through the ages. Providing a framework for how to live in community together, it resurrects its biblical commission. It tells the inspiring story of the power of the Church and the beauty of its eternal directive. The Church is a liberation front.

Kemper Crabb is a contemporary scholar, a dedicated Episcopal priest, a prolific songwriter, recording artist and a quiet revolutionary. His media impact varies from his PBS special, Downe in Yon Forest, with a viewing audience in the millions, to a series of worship recordings and rock albums shared on early CCM radio. He is now most active in churches and concert halls in Texas. Considered by many a pioneer of Christian music, he has always garnered a following from the faithful. Known for his bands ArkAngel and RadioHalo, he also joined the radio-popular Caedmon’s Call and is now known to many for his popular Medieval Christmas Concerts. Through all his creative transformations, Kemper has been devoted to Christ and His church. He has studied, served and become a well-respected priest known for his exceptional teaching. His ardor for Christ leads his learning audience to pursue an uncompromising Gospel. He is a sought after teacher in and out of his ordained CEEC community. Deeply committed as an educator in the Classical Charter School community he is helping reform how students view their world. A bold Texan, he has a heritage of evangelism through his father, who has been engaged in foreign missions for over forty years, with two Nobel prize nominations. His passion for Jesus and His church has led Kemper to write this manuscript and engage readers to consider the Church as a revolutionary Liberation Front.
or
Not Currently Available for Direct Purchase
Copyright © 2020 American Booksellers Association