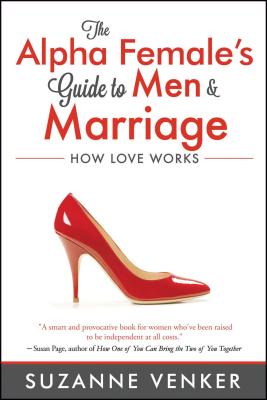 The Alpha Female's Guide to Men and Marriage

As seen on Fox & Friends

The Alpha Female's Guide to Men and Marriage shows women who have a dominating personality how to love a man.

America is in love with the alpha female. She’s the quintessential modern woman—assertive, razor sharp, and fully in control. Her success in the marketplace is undeniable, a downright boon to society. But what happens when the alpha female gets married?

She becomes an alpha wife, of course.

An alpha wife is in charge of everything and everyone. She is, quite simply, the Boss. The problem is, no man wants a boss for a wife. That type of relationship may work for a spell, but it will eventually come crashing down. Since 1970, just as women became more and more powerful outside the home—more alpha—the divorce rate has quadrupled. And it is women who lead the charge. Today, 70% of divorce is initiated by wives.

Do men just make lousy husbands? Not at that rate, says Suzanne Venker, bestselling author of The War on Men. The truth is that women don’t know how to be wives. Why would they? That’s not what they were raised to become.

But women can learn. There’s an art to loving a man, says Venker, and any woman can master it. An alpha female herself, Venker learned how to be a wife the hard way—through trial and error. Lots of error. And here’s what she knows today—the set of skills a woman needs to pursue a career, or even to raise children, is the exact set of skills that will mess up her marriage but good. No man likes to be told what to do. And no woman respects the man who does.

The Alpha Female's Guide to Men and Marriage gives women who are used to being in charge the tools they need to make their marriages less competitive and more complementary. Part memoir, part advice, this brave manifesto argues that while marriage is more challenging for the alpha female, it is possible to find peace in your marriage. In fact, it may be easier than you think.

Praise For The Alpha Female's Guide to Men and Marriage: How Love Works…

“The Alpha Female's Guide to Men & Marriage is a smart and provocative book for women who've been raised to be independent at all costs or to be resentful of men and marriage. Using her own story as a model, Suzanne Venker shows how a simple shift in attitude is all women need to find peace with the men in their lives. If you're a woman who feels successful in life but unsuccessful in love, look no further. The Alpha Female's Guide to Men & Marriage is your answer!”
— Susan Page, relationship expert and author of How One of You Can Bring the Two of You Together

“Suzanne Venker presents a refreshing guide to a happy marriage. While she takes aim at alpha females, the untold secret is that this book is for all women. She's lived it. She's studied it. And the insights and advice she gives will save many marriages. I love her passion for marriage, and so will you.”
— Dr. Scott Haltzman, Distinguished Fellow, American Psychiatric Association, and author of The Secrets of Happily Married Women

“In The Alpha Female’s Guide to Men and Marriage, Suzanne Venker shows that being an alpha female doesn’t need to interfere with love and harmony.”
— Shawn T. Smith, Psy.D., author of The Practical Guide to Men

“Suzanne Venker tells women how to be a full partner at home rather than the boss—and how to possibly save their marriages. Lively and sensible. A fun read.”
— John Townsend, Professor of Anthropology and author of What Women Want—What Men Want

Suzanne Venker is on a mission to deprogram women from the toxic cultural influences that undermine their success in life and in love. She’s the author of five books, a certified relationship coach, and host of The Suzanne Venker Show. Her work has appeared in countless publications, such as Fox News, the Washington Examiner, TIME, USA Today, and the New York Post. She has also appeared on many television and radio programs. Suzanne lives in the Midwest with her husband of twenty-three years. They have a son and a daughter, both of whom are in college. Her website is www.suzannevenker.com and her podcast can be reached at www.thesuzannevenkershow.com.
Loading...
or support indie stores by buying on