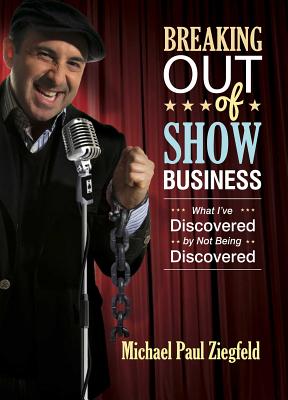 Breaking Out of Show Business

The laugh-out-loud story of a 25-year veteran of show business brimming with with honesty, humor and plenty of name-dropping!

"You have probably never heard of me. There may be a very slight possibility you recognize my name or maybe my face. But I have no delusions. I've always said, 'I’ve sky-rocketed to the middle.' It’s a very small percentage of those who become famous. But I never really wanted that. I’ve worked in over forty countries, comedy-toured with some “names,” done some television, a few movies, voiceovers, TV/film puppeteering, off-off-take-a-left-turn-off Broadway, producing, directing, writing, coaching, and I only did restaurant and temp work in my late teens. I haven’t gotten as far as some, but I've gotten farther than others who have tried to live a show business life. This is a little taste of my attempts to move up the ladder. I hope you like it. These are the highlights of my life...so far." - Michael Paul Ziegfeld

Michael Paul Ziegfeld was the youngest intern hired at an NBC affiliate after sneaking into the building. He then landed the job at CBS radio because he was the only person to trudge through the biggest blizzard of the decade for the interview. Years went by with day jobs as a stage tech, to night jobs headlining comedy clubs, to puppeteering for Jim Henson on a Tuesday to writing jokes for the Letterman show on a Wednesday. Now, he's on the eve of his retirement after 25 years of a show business career.
Loading...
or
Not Currently Available for Direct Purchase