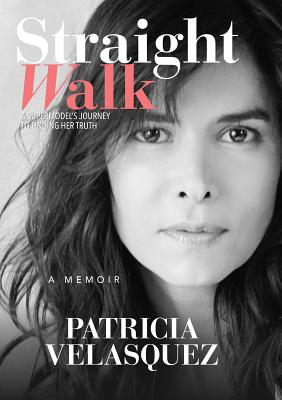 A Supermodel's Journey to Finding Her Truth

In this intimate, inspiring, empowering and heartfelt memoir, the “world’s first Latina supermodel” Patricia Velasquez reveals the naked truth about her life.

The riveting story of a Latina actress and supermodel and her rise from a poor neighborhood in Venezuela to the fashion runways of Milan, Paris, New York, and London. Patricia Velasquez worked tirelessly to help lift her family out of poverty, but she spent years feeling isolated, living a lie, and hiding her true self from those she loved most.
As a child, Patricia Velasquez watched her mother struggle to make ends meet and put food on the table for their large family. In her unprivileged community in Venezuela, food and water were scarce. It pained her to see her mother work so hard, often denying herself food or clothing for the sake of her six children, and Patricia was determined to escape this impoverished life. Straight Walk is the story of how this courageous young girl found a way to earn money for her family—and ultimately became a supermodel and Hollywood actress.

When Patricia was in her late teens, a friend groomed her to enter the Miss Venezuela pageant, which opened the door to the modeling world. From there, her story weaves its way onto the runways of Milan, Paris, London and New York working for designers like Isaac Mizrahi, Karl Lagerfeld, and Carolina Herrera. By some people’s estimation, she was the first Latina Supermodel, living life in the Glamazon era. Patricia landed on the cover of most every major fashion magazine in the world and posed for the Sports Illustrated’s Swimsuit Edition and Victoria’s Secret.
For many years, Patricia used her professional success to compensate for a secret she hid from her family. She convinced herself that her family’s happiness was more important than her own, and she spent years feeling achingly alone. Worse, she didn’t know the price she’d pay for keeping a secret and living a lie, preventing not only herself from walking her journey, but those she loved most. Now she shares her story to empower others to live authentic lives and find their truth.

Instantly recognizable from both movies, TV and fashion magazines
Loading...
or
Not Currently Available for Direct Purchase