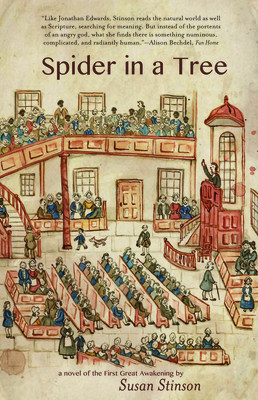 Spider in a Tree

Stinson reads the natural world as well as Scripture, searching for meaning. But instead of the portents of an angry god, what she finds there is something numinous, complicated, and radiantly human.--Alison Bechdel, author of Fun Home

Through an ardent faith in the written word Susan Stinson is a novelist who translates a mundane world into the most poetic of possibilities.--Alice Sebold, author of The Lovely Bones

Jonathan Edwards is considered America's most brilliant theologian. He was also a slave owner. This is the story of the years he spent preaching in eighteenth century Northampton, Massachusetts.

In his famous sermon Sinners in the Hands of an Angry God, Edwards compared a person dangling a spider over a hearth to God holding a sinner over the fires of hell. Here, spiders and insects preach back. No voice drowns out all others: Leah, a young West African woman enslaved in the Edwards household; Edwards's young cousins Joseph and Elisha, whose father kills himself in fear for his soul; and Sarah, Edwards's wife, who is visited by ecstasy. Ordinary grace, human failings, and extraordinary convictions combine in unexpected ways to animate this New England tale.

Susan Stinson is the author of three novels and a collection of poetry and lyric essays and was awarded the Lambda Literary Foundation's Outstanding Mid-Career Novelist Prize. Writer in Residence at Forbes Library in Northampton, Massachusetts, she is also an editor and writing coach.

Susan Stinson (susanstinson.net) is the author of four novels, including Spider in a Tree and Martha Moody, and a collection of poetry and lyric essays. Her work has appeared in The Public Humanist, The Kenyon Review, The Seneca Review, Curve, Lambda Literary Review, and The Women's Review of Books. She has taught at Amherst College, been awarded the Lambda Literary Foundation's Outstanding Mid-Career Novelist Prize, and has received a number of fellowships. An editor and writing coach, she was born in Texas, raised in Colorado, and now lives in Northampton, Massachusetts.
Loading...
or support indie stores by buying on