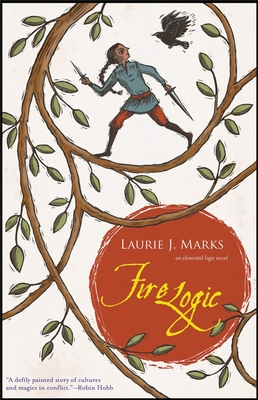 Laurie Marks' Elemental Logic series introduced readers to the realm of Shaftal, an intricately imagined land whose people operate within the boundaries of their basic natures--here defined as logics--which sometimes bequeath them with access to magical, elemental powers and sometimes embroil them in unsolvable internal conflicts.

Fire Logic centers around the strong female character Zanja Na'Tarwein, a fighter and last survivor of her people in an occupied country. Alongside her is Karis, a powerful half-giant, who is a drug addict and lives in obscurity, hiding her considerable powers. Surrounded by incomprehensible loss, Zanja also forms a bond with Emil, an officer of the army she joins.

Battling the complex forces of power, desire, and obligation, follow along as the trio work together to try and change the course of history.