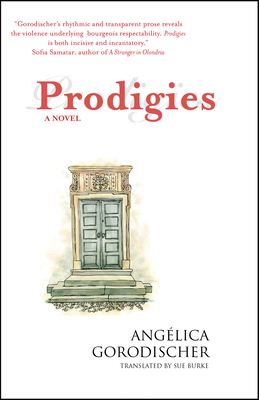 Locus Recommended Reading Prodigies explores the story of the poet Novalis's birthplace in the German town of Weissenfels after it is converted into a boarding house. Moving, subtle, and full of wit, irony, and dreams, this novel fills the house with the women who lived there throughout the nineteenth century, and across the flow of history constructs the secret drama of their destinies. Praise for Prodigies: I am so in love with this book I could explode I want to hug it and pet it and call it George. I knew it would be good, because Small Beer Press publishes the best, but I had no idea how just enchanted I would be with this delightful novel of unusual tenants at a boarding house in the nineteenth century. This book scratched my Muriel Spark/Barbara Comyns itches, with an extra side of the unusual. Originally published in 1994, this is Argentinian writer Gorodischer's third novel to be translated into English. I will definitely be reading the first two now "
-- Liberty Hardy, Book Riot "Put strangers around a common table and you have possibilities, in life and in literature. Thus the driving premise of The Magic Mountain, and thus Argentine novelist Gorodischer's slender book. . . . Gorodischer writes a poetic, vigorous prose. Her story, dreamlike and start-and-stop, takes effort, for though brief, it is dense--and well worth the trouble."
-- Kirkus Reviews Because of Prodigies' unusual style, it requires great care and thoughtfulness to read. It cannot be rushed through or casually scanned. An impatient reader will abandon this book long before its rich rewards can be reaped. The right audience will have a willingness to savor, to double-back over sentences, to bob along to wherever the author and characters wish to take you. If you are ready for the experience of Prodigies, it is definitely ready for you.
-- Carmen Maria Machado, NPR Gorodischer's rhythmic and transparent prose reveals the violence underlying bourgeois respectability. Prodigies is both incisive and incantatory.--Sofia Samatar, author of A Stranger in Olondria Prodigies, which she considers to be her best novel . . . takes place in Germany in the home of the poet Novalis after his death, and is a humorous and ironic portrayal of the women who passed through that home.--Women and Power in Argentinean Literature Ang lica Gorodischer was born in Buenos Aires in 1928 and has lived in Rosario since 1936. She has published many novels and short story collections including Kalpa Imperial, Mango Juice, and Trafalgar, as well as a memoir, History of My Mother. Her work has been translated into many languages and her translators include Ursula K. Le Guin and Alberto Manguel. With certain self-satisfaction she claims she has never written plays or poems, not even at sixteen when everybody writes poems, especially on unrequited love. She received two Fulbright awards as well as many literary awards around the world, including a 2014 Konex Special Mention Award.