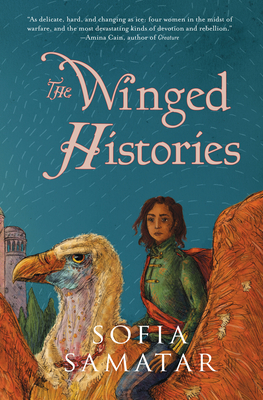 Four women -- a soldier, a scholar, a poet, and a socialite -- are caught up on opposing sides of a violent rebellion. As war erupts and their loyalties and agendas and ideologies come into conflict, the four fear their lives may pass unrecorded. Using the sword and the pen, the body and the voice, they struggle not just to survive, but to make history. Here is the much-anticipated companion novel to Sofia Samatar's World Fantasy Award-winning debut, A Stranger in Olondria. The Winged Histories is the saga of an empire -- and a family: their friendships, their enduring love, their arcane and deadly secrets. Samatar asks who makes history, who endures it, and how the turbulence of historical change sweeps over every aspect of a life and over everyone, no matter whether or not they choose to seek it out. Sofia Samatar is the author of the Crawford, British Fantasy, and World Fantasy award-winning novel A Stranger in Olondria. She also received the John W. Campbell Award. She has written for the Guardian, Strange Horizons, Lightspeed, and many other publications. She is working on a collection of stories. Her website is sofiasamatar.com.

Sofia Samatar is the author of the novel A Stranger in Olondria, the Hugo and Nebula nominated short story "Selkie Stories Are for Losers," and other works. She has won the John W. Campbell Award, the Crawford Award, the British Fantasy Award, and the World Fantasy Award. Two of her stories were selected for the inaugural edition of the Best American Science Fiction and Fantasy. She has written for the Guardian, New Inquiry, Believer, Strange Horizons, BOMB, and Clarkesworld, among others. She is working on a collection of stories. Her website is sofiasamatar.com.
Loading...
or
Not Currently Available for Direct Purchase