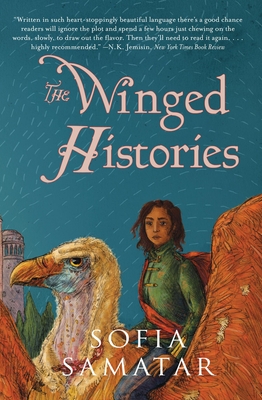 Four women, soldier, scholar, poet, and socialite are caught up on different sides of a violent rebellion. As war erupts and their families are torn apart, they fear they may disappear into the unwritten pages of history. Using the sword and the pen, the body and the voice, they struggle not just to survive, but to make history.

Praise for The Winged Histories:

"Like an alchemist, Sofia Samatar spins golden landscapes and dazzling sentences.... a fantasy novel for those who take their sentences with the same slow, unfolding beauty as a cup of jasmine tea, and for adventurers like Tav, who are willing to charge ahead into the unknown."--Shelf Awareness (starred review)

"Above all, it's a story about love--the terrible love that tears lives apart. Doomed love; impossible love; love that requires a rewriting of the rules, be it for a country, a person, or a story."--Jenn Northington, Tor.com

"An imaginative, poetic, and dark meditation on how history gets made."
--Hello Beautiful

Sofia Samatar is the author of the novels A Stranger in Olondria and The Winged Histories and a collection, Tender: Stories. She has written for the Guardian, Strange Horizons, New Inquiry, Believer, and Clarkesworld, among others, and has won the John W. Campbell Award, the Crawford Award, the British Fantasy Award, and the World Fantasy Award. She lives in Virginia and her website is sofiasamatar.com.

Sofia Samatar is the author of the novel A Stranger in Olondria, the Hugo and Nebula nominated short story "Selkie Stories Are for Losers," and other works. She has won the John W. Campbell Award, the Crawford Award, the British Fantasy Award, and the World Fantasy Award. Two of her stories were selected for the inaugural edition of the Best American Science Fiction and Fantasy. She has written for the Guardian, New Inquiry, Believer, Strange Horizons, BOMB, and Clarkesworld, among others. She is working on a collection of stories. Her website is sofiasamatar.com.
or
Not Currently Available for Direct Purchase
Copyright © 2020 American Booksellers Association