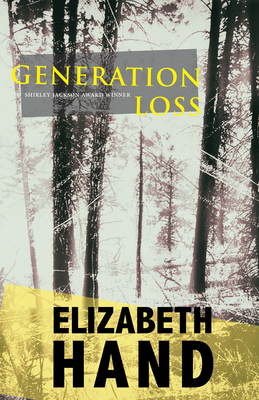 Cass Neary made her name in the 1970s as a photographer embedded in the
burgeoning punk movement in New York City. Her pictures of the musicians
and hangers on, the infamous, the damned, and the dead, got her into
art galleries and a book deal. But thirty years later she is adrift, on
her way down, and almost out. Then an old acquaintance sends her on a
mercy gig to interview a famously reclusive photographer who lives on an
island in Maine. When she arrives Downeast, Cass stumbles across a
decades-old mystery that is still claiming victims, and into one final
shot at redemption. Generation Loss is the Shirley Jackson Award winning
novel that launched Elizabeth Hand's ex-punk photographer Cass Neary
into the world.

"Elizabeth Hand's Cass Neary series began in 2008 with Generation Loss, a startling and addictive novel that introduced a protagonist fueled by drugs and post-punk irreverence."

"Sharp, clear, and mercilessly lean. Not only did that style fit
Cass, it fit Hand: The author, roughly the same age as her character,
was also a part of the punk scene in her youth. Generation Loss
rasps with gritty authenticity, from the copious references to artists
like Iggy Pop and the Ramones to the way Cass' hardcore attraction to
damage and destruction propels her deep into the book's maze of murder
and secrets."

"Although it moves like a thriller, it detonates with greater resound. A dark and beautiful novel."

"Cass is a marvel, someone with whom we take the difficult journey
toward delayed adulthood, wishing her encouragement despite grave odds."
--Los Angeles Times

Elizabeth Hand is the bestselling author of fourteen genre-spanning novels and five collections of short fiction and essays. Her work has received multiple Shirley Jackson, World Fantasy and Nebula Awards, among other honors, and several of her books have been New York Times and Washington Post Notable Books.
Loading...
or support indie stores by buying on