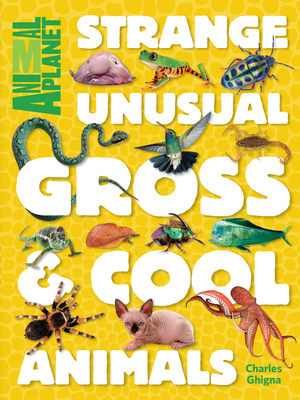 Animal Planet presents the ickiest, stickiest, blobbiest, and oddest animals in the world!

Did you know that an archerfish can spit water up to 16 feet? Or that the giant weta is the world's largest and heaviest insect? Animal Planet's fascinating exploration of animal oddities introduces young animal lovers to some of the most astonishing, gorgeous, and obscure animals in the world-including some brand new discoveries! Packed with more than 200 vibrant photographs and fun facts about animals with unusual behaviors, strange appearances, and remarkable stats, this deluxe gift book is perfect for reluctant readers or anyone who loves totally gross and amazing animals.

A portion of the proceeds from the sale of books in the Animal Bites series benefits the principal partners of R.O.A.R. (Reach Out. Act. Respond.), Animal Planet's initiative dedicated to improving the lives of animals in our communities and in the wild.

Animal Planet, a multimedia unit of Discovery Communications, is the world's only entertainment brand that immerses viewers in the full range of life in the animal kingdom with rich, deep content via multiple platforms and offers animal lovers and pet owners access to a centralized online, television, and mobile community for immersive, engaging, high-quality entertainment, information, and enrichment. Animal Planet consists of the Animal Planet television network, available in more than 92 million homes in the US; online assets: www.Animalplanet.com, the ultimate online destination for all things animal; Animal Planet L!VE, the go-to digital destination for round-the-clock, unfiltered access to the animal kingdom; and other media platforms including a robust Video-on-Demand (VOD) service and merchandising extensions.

Charles Ghigna, also known as Father Goose, is an award-winning poet, children's author, speaker, and nationally syndicated feature writer. He is the author of more than 5,000 poems and 100 books. His books have been featured on ABC-TV's "Good Morning America," PBS, and NPR. Ghigna's poetry has appeared in The New Yorker, Harper's, Highlights, and Cricket, and has been widely anthologized.