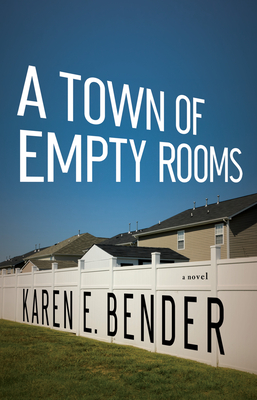 A Town of Empty Rooms

Karen E. Bender burst on to the literary scene a decade ago with her luminous first novel, Like Normal People, which garnered remarkable acclaim. A Town of Empty Rooms presents the story of Serena and Dan Shine, estranged from one another as they separately grieve over the recent loss of Serena's father and Dan's older brother. Serena's actions cause the couple and their two small children to be banished from New York City, and they settle in the only town that will offer Dan employment: Waring, North Carolina. There, in the Bible belt of America, Serena becomes enmeshed with the small Jewish congregation in town led by an esoteric rabbi, whose increasingly erratic behavior threatens the future of his flock. Dan and their young son are drawn into the Boy Scouts by their mysterious and vigilant neighbor, who may not have their best intentions at heart. Tensions accrue when matters of faith, identity, community, and family all fall into the crosshairs of contemporary, small-town America. A Town of Empty Rooms presents a fascinating insight into the lengths we will go to discover just where we belong.

Praise For A Town of Empty Rooms…

Praise for A Town of Empty Rooms

Bender’s a keen observer of marriage and the psychological bonds that tie mothers, daughters, fathers, and sons. The novel excels in stirring the reader’s sympathy and outrageBender offers an absorbing and often touching look at the struggles of an urban middle-class family to adjust to an unfamiliar Americarural, provincial, and homogeneous.” Publishers Weekly

Bender has created complex characters in a novel that provocatively considers our basic need to connect with other people, and how very fragile those connections can be.” Booklist

I read this absorbing book in one sitting. It has everything to make you go on reading conflict, hope, disappointment; displays of confusion, displays of ignorance, displays of foolishness; and, at bottom, an affecting depiction of human isolation.” Edith Pearlman

Karen Bender’s novel is filled with subtle recognitions. As her exiled characters rebuild their lives, they discover the human heart’s resilient capacity for love. A Town of Empty Rooms does what all terrific novels do: it resonates with the reader long after its covers have been closed. Read the book; you’ll see.” Tom Grimes, author of Mentor: A Memoir

"Bender portrays a marriage in crisis with heartbreaking accuracy." Kirkus

Karen E. Bender is the author of a novel, Like Normal People. Her fiction has appeared in The New Yorker, Granta, Zoetrope, Ploughshares, Story, Harvard Review, The Iowa Review, and other magazines. Her stories have been anthologized in Best American Short Stories, Best American Mystery Stories, New Stories from the South: The Year's Best, and have won two Pushcart prizes. She has won grants from the Rona Jaffe Foundation and the NEA. She is also co-editor of the anthology Choice: True Stories of Birth, Contraception, Infertility, Adoption, Single Parenthood, and Abortion. She lives in North Carolina with her husband, novelist Robert Anthony Siegel, and their two children, and teaches creative writing at the University of North Carolina at Wilmington.
Loading...
or
Not Currently Available for Direct Purchase