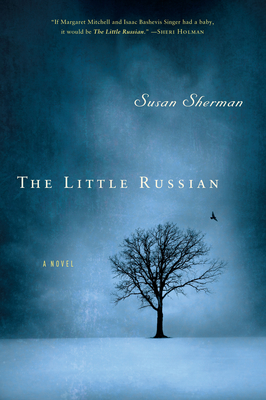 The Little Russian spotlights an exciting new voice in historical fiction, an assured debut that should appeal to readers of Away by Amy Bloom or Cold Mountain by Charles Frazier. The novel tells the story of Berta Alshonsky, who revels in childhood memories of her time spent with a wealthy family in Moscow -a life filled with salons, balls and all the trappings of the upper class -- very different from her current life as a grocer's daughter in the Jewish townlet of Mosny. So when a mysterious and cultured wheat merchant walks into the grocery, Berta's life is forever altered. She falls in love, unaware that he is a member of the Bund, The Jewish Worker's League, smuggling arms to the shtetls to defend them against the pogroms sweeping the Little Russian countryside.
Married and established in the wheat center of Cherkast, Berta has recaptured the life she once had in Moscow. So when a smuggling operation goes awry and her husband must flee the country, Berta makes the vain and foolish choice to stay behind with her children and her finery. As Russia plunges into war, Berta eventually loses everything and must find a new way to sustain the lives and safety of her children. Filled with heart-stopping action, richly drawn characters, and a world seeped in war and violence; The Little Russian is poised to capture readers as one of the hand-selling gems of the season.

Susan Sherman is the author of The Little Russian and If You Are There. She is the former Chair of the Art Department of Whittier College and the co-creator of one of the most successful television shows for children in the history of the Disney Network. Learn more at susanshermanauthor.com.
Loading...
or support indie stores by buying on