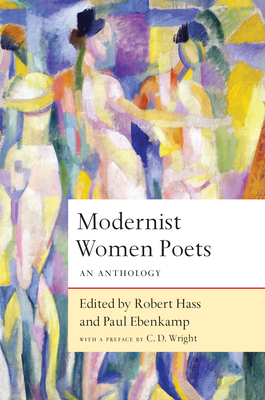 The 20th century was a time of great change, particularly in the arts, but seldom explored were the female poets of that time. Robert Hass and Paul Ebenkamp have put together a comprehensive anthology of poetry featuring the poems of Gertrude Stein, Lola Ridge, Amy Lowell, Elsa Von Freytag–Loringhoven, Adelaide Crapsey, Angelina Weld Grimke, Anne Spencer, Mina Loy, Hazel Hall, Hilda Doolittle, Marianne Moore, Djuna Barnes, and Hildegarde Flanner. With an introduction from Hass and Ebenkamp, as well as detailed annotation through out to guide the reader, this wonderful collection of poems will bring together the great female writers of the modernist period as well as deconstruct the language and writing that surfaced during that period.

"The poems collected in Modernist Women Poets: An Anthology are diverse, but they are linked, too. Each seems to gaze directly and speak indirectly –– or sometimes vice–versa –– in that quintessentially modernist mode, even as the particulars of intention and expression are distinct and individual. [...] How inspiring and heartening it is to read their daring attempts to do something entirely new with language, undertaken both in seriousness and wild play." —Bookslut

"Co–editors Hass (a former U.S. Poet Laureate) and Ebenkamp have produced that rare, valuable thing: a volume that could be at once a resource for educators, and a fine entrée for the general reader." — Publisher's Weekly Starred Review

[Praise for Robert Hass]
"[Robert] Hass has significantly broadened the role of poet laureate to include not only his love for poetry but also his concern for literacy and his passion for environmentalism."—Los Angeles Times

Paul Ebenkamp previously edited the Counterpoint title The Etiquette of Freedom, a conversation with Jim Harrison and Gary Snyder and Song of Myself, a collection of poems from Walt Whitman. He lives and works in Berkeley, California.
Loading...
or
Not Currently Available for Direct Purchase