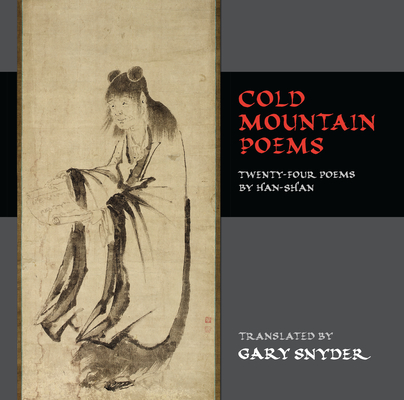 In 1953, Gary Snyder returned to the Bay Area and, at age 23, enrolled in graduate school at the University of California, Berkeley, to study Asian languages and culture. He intensified his study of Chinese and Japanese, and taking up the challenge of one of his professors, Chen Shih-hsiang, he began to work on translating a largely unknown poet by the name of Han Shan, a writer with whom the professor thought Snyder might feel a special affinity. The results were magical. As Patrick Murphy noted, These poems are something more than translations precisely because Snyder renders them as a melding of Han Shan's Chinese Ch'an Buddhist mountain spirit trickster mentality and Snyder's own mountain wilderness meditation and labor activities. The suite of 24 poems was published in the 1958 issue of The Evergreen Review, and the career of one of America's greatest poets was launched.
In 1972, Press-22 issued a beautiful edition of these poems written out by hand in italic by Michael McPherson. We are doing a new augments edition based on the old, with a new design, a preface by Lu Ch'iu-yin, and an afterword by Mr. Snyder where he discusses how he came to this work and what it meant to his development as a writer and Buddhist.
On May 11, 2012, for the Stronach Memorial Lecture at The University of California, more than fifty years after his days there as a student, Snyder offered a public lecture reflecting on Chinese poetry, Han Shan, and his continuing work as a poet and Translated by. This remarkable occasion was recorded and we are including a CD of it in our edition, making this the most definitive edition of Cold Mountain Poems ever published.

Gary Snyder is the author of more than twenty collections of poetry and prose. Since 1970 he has lived in the watershed of the South Yuba River in the foothills of the Sierra Nevada. Winner of the Pulitzer Prize in 1975, Snyder has also been awarded the Bollingen Prize for Poetry and the Robert Kirsch Lifetime Achievement Award. His 1992 collection, No Nature, was a National Book Award finalist, and in 2008 he received the Ruth Lilly Poetry Prize. Snyder is a poet, environmentalist, educator and Zen Buddhist.
Loading...
or
Not Currently Available for Direct Purchase