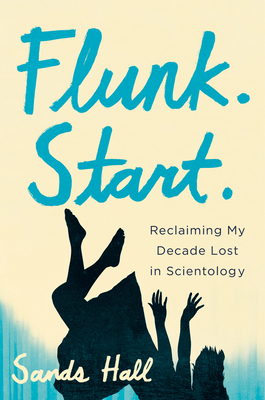 Reclaiming My Decade Lost in Scientology

"With its keen attention to the language and tactics of the church, Hall’s memoir is unique among the assortment of Scientology reports and exposés, offering insight into the certainties that its subjects gain." —The Nation

In the secluded canyons of 1980s Hollywood, Sands Hall, a young woman from a literary family, strives to forge her own way as an artist. But instead, Hall finds herself increasingly drawn toward the certainty that Scientology appears to offer. Her time in the Church includes the secretive illness and death of its founder, L. Ron Hubbard, and the ascension of David Miscavige. In this compelling memoir, Hall reveals what drew her into the religion—with its intrigues and unique contemporary vision—and how she came to confront its darker sides and finally escape.

"Some of the most penetrating, illuminating prose about how an educated and skeptical person could get so deeply into, and then struggle to escape, what everyone around her warned was a dangerous cult . . . brilliant." —The Underground Bunker

"If it is Scientology's offer of a life with meaning that hauls her in . . . it is its approach to meaning that keeps her . . . Hall's fascination with this is palpable." —Camille Ralphs, The Times Literary Supplement

Praise For Reclaiming My Decade Lost in Scientology: A Memoir…


“Hall’s powerful evocation of this complex mix of pride and insecurity, combined with an inborn yearning for transcendence, makes the recent paperback reissue of her 2018 memoir most welcome . . . Reclaiming My Decade Lost in Scientology is written in such a sharply intelligent yet non–aggrieved voice that, even as a person who practices elements of Christianity and Buddhism (and as a reader with no prior interest in Scientology), I found its meticulous depiction of the indoctrination process fascinating . . . Hall’s deep–seated insecurities may lead her into the Church, but it’s her innate compassion that begins to lead her out.” —Rachel Howard, Los Angeles Review of Books“Hall is a true wordsmith, a verbal lapidarist for whom language is a laboratory, a factory, and an ‘audit’ process in its own right. The result is a piercing emotional honesty and adamant clarity, giving readers more than simply a memoir or a look into a corner of American culture that’s usually concealed from the uninitiated. This book, generous and penetrating, is a rather profound act of psychological inquiry.” —Northern California Book Awards

“With its keen attention to the language and tactics of the church, Hall’s memoir is unique among the assortment of Scientology reports and exposés, offering insight into the certainties that its subjects gain . . . Hall’s focus on this 'cobweb' of intimate entanglement is what makes [this book] compelling—and different from other, more extraordinary accounts of abuse in Scientology’s upper echelons . . . most revealing in its depiction of Scientology as just one of many expressions that the American search for selfhood can manifest.” —Michael Friedrich, The Nation

“It is no surprise when, after a few encounters with Scientology . . . Hall begins to feel its pull. And if it is Scientology's offer of a life with meaning that hauls her in, alongside pressure from her new Scientologist husband, it is its approach to meaning that keeps her . . . Those sections of the memoir with 'Study Tech' as their focus are some of the most interesting: a misunderstood word can be 'cleared' using a dictionary, often with focus on etymology, and Hall's fascination with this is palpable . . . Etymology lights a path deep into history, into the twists and turns of language, for both Sands Hall and the reader.” —Camille Ralphs, The Times Literary Supplement

“An intriguing, beautifully written memoir . . . She toggles between her family and the church, digging deeply into the dynamics of power and control, love and compassion, before coming to a surprising resolution.” —Jane Ciabattari, Literary Hub

“[Hall] uses her impressive writing skills to convey her experiences during what she had once shamefully viewed as a squandered decade in her life . . . What makes her memoir most enjoyable and understandable is her decision to be honest about all the personal doubts she had during this time.” —Andrea Geary, Winnipeg Free Press

“As a memoir and a thoughtful exploration of faith and belief, I heartily recommend it.” —Kevin Coupe, MorningNewsBeat

“Sands Hall is an experienced literary talent and writing teacher whose seven years in Scientology . . . provide some of the most penetrating, illuminating prose about how an educated and skeptical person could get so deeply into, and then struggle to escape, what everyone around her warned was a dangerous cult . . . Hall does a brilliant job.” —The Underground Bunker

“Novelist and actress Hall (Catching Heaven) probes her descent into Scientology in this impassioned, wonderfully constructed memoir . . . Hall reflects with brutal honesty on her decisions throughout this meticulously crafted book, which explores her negative experiences with Scientology and how her desire to please led her to believe in the unbelievable.” —Publishers Weekly (starred review)

“Hall has written a beautiful memoir about spending seven years as a Scientologist . . . An early candidate for memoir of the year, this is a thrilling story of one woman’s search for truth and her place in the world.” —Library Journal (starred review)

“Serves as a significant behind–the–scenes look at this cultlike religion. Frank and edifying . . . A good complement to Lawrence Wright's Going Clear.” —Kirkus Reviews

“Like many former Scientologists, Hall is honest about the insidious ways it can capture and isolate its adherents. It’s a memoir of a life filled with joy and tragedy, and readers will appreciate the author’s candor.” —Booklist

“Sands Hall's transcendent memoir . . . describes, with precise and utterly absorbing detail, her experience in the world of Scientology. But this is also a story that explores so many issues—how language is used to both illuminate and obscure, how we long for connection and meaning; it's also a vivid portrait of how we find a place in our family and find a path through chaos. I could not put down this book—it is a triumph, a work of great honesty and insight. It is a necessary book for our time.” —Karen E. Bender, author of The New Order

“It is a great strength of Sands Hall's clear–eyed and compelling memoir that she shows what she found authentic and rewarding in the Church of Scientology, not merely its corruption and imprisoning dogma. There is regret in her account but little anger or blame. Her triumph is not that she got out, but that she winnowed what nourishment the church could provide and took it forward in her spiritual journey.” —John Daniel, author of Gifted and Rogue River Journal

“Sands Hall has brought her remarkable talents to bear on this memoir. By turns endearing and alarming, this story describes the hazards involved in having to choose between a strong, loving family and a demanding, seductive church—between one sort of belonging and another. I consider it Sands's best book.” —Lynn Freed, author of The Romance of Elsewhere and The Last Laugh

“In this unflinching and nuanced self–portrait, Sands Hall examines a decade of entanglement with the cult of Scientology and her circuitous process of liberation. Interweaving the backstory of a tragic accident that left a hole in her legendary family, Hall takes readers on a profound journey of loss, longing, and recovery.” —Elizabeth Rosner, author of Survivor Café

“Sands Hall displays her fine literary talent in [this book], a raw and moving account of her personal journey through the Church of Scientology. Sands shares her uniquely Californian coming–of–age tale with grace and courage.” —Julia Flynn Siler, author of The House of Mondavi and Lost Kingdom

“Sands Hall, daughter of a novelist whose writing workshop launched the careers of dozens of famous authors, was born into intellectual splendor, but worried about living up to her family's reputation and expectations. How Scientology used those youthful fears to rope her into one of the greatest mind–control hustles of all time is a cautionary tale not only for our religious life, but especially now, for our political one.” —Jordan Fisher Smith, author of Engineering Eden and Nature Noir

Sands Hall is the author of the novel Catching Heaven, a WILLA Award Finalist for Best Contemporary Fiction, and a Random House Reader’s Circle selection; and of a book of writing essays and exercises, Tools of the Writer’s Craft. She teaches at the Iowa Summer Writing Festival and at the Community of Writers at Squaw Valley, and is an associate teaching professor at Franklin & Marshall College in Lancaster, Pennsylvania.
Loading...
or support indie stores by buying on