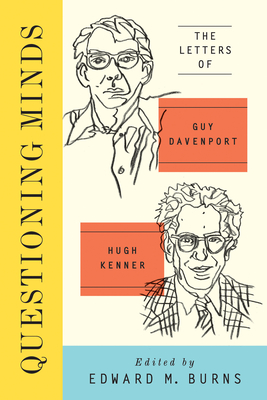 The Letters of Guy Davenport and Hugh Kenner

"The most intellectually exhilarating work published in 2018 . . . A lasting treasure." --Michael Dirda, The Washington Post Hugh Kenner (1923-2003) and Guy Davenport (1927-2005) first met in September 1953 when each gave a paper on Ezra Pound at Columbia University. They met again in the fall of 1957, and their correspondence begins with Kenner's letter of March 7, 1958. In the next forty-four years, they exchanged over one thousand letters. An extraordinary document of a literary friendship that lasted half a century, the letters represent one of the great and--with the dawn of the age of text and Twitter--one of the last major epistolary exchanges of its kind. Students and lovers of modernism will find, in the letters, matchless engagements with Eliot, Joyce, Beckett, Basil Bunting, Charles Tomlinson, R. Buckminster Fuller, Stan Brakhage, Jonathan Williams, and the American modernists William Carlos Williams, Marianne Moore, and Louis Zukofsky. The correspondence ends with Kenner's letter of August 9, 2002, lamenting how they had drifted apart. The extensive notes and cross-referencing of archival sources in Questioning Minds are a major contribution to the study of literary modernism. The letters contained within explore how new works were conceived and developed by both writers. They record faithfully, and with candor, the urgency that each brought to his intellectual and creative pursuits. Here is a singular opportunity to follow the development of their unique fictions and essays.

GUY DAVENPORT (1927-2005) was born in South Carolina and lived for more than forty years in Lexington, Kentucky, where he died in 2005. The author of more than twenty books, including The Geography of the Imagination, Eclogues, and The Death of Picasso, he was also a distinguished professor at the University of Kentucky and a MacArthur Fellow in 1990. HUGH KENNER (1923-2003), literary critic and distinguished Joyce scholar, held academic posts at the University of California, Santa Barbara; Johns Hopkins University; and the University of Georgia. He was the author of twenty books, including The Pound Era, Joyce's Voices, and A Homemade World. EDWARD M. BURNS is Professor Emeritus at William Paterson University of New Jersey. He has edited Staying on Alone: Letters of Alice B. Toklas, The Letters of Gertrude Stein and Carl Van Vechten, The Letters of Gertrude Stein and Thornton Wilder, A Tour of the Darkling Plain: The Finnegans Wake Letters of Thornton Wilder and Adaline Glasheen, and A Passion for Joyce: The Letters of Hugh Kenner and Adaline Glasheen. He served as an editor of Text and its successor journal Textual Cultures.
or
Buy Here
Copyright © 2020 American Booksellers Association