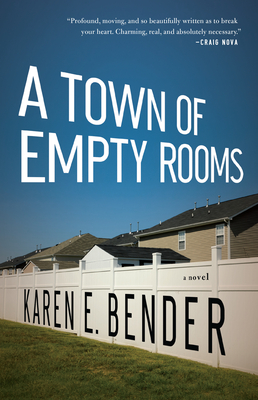 A Town of Empty Rooms (Paperback)

Karen E. Bender burst on to the literary scene a decade ago with her luminous first novel, Like Normal People, which garnered remarkable acclaim. A Town of Empty Rooms presents the story of Serena and Dan Shine, estranged from one another as they separately grieve over the recent loss of Serena's father and Dan's older brother. Serena's actions cause the couple and their two small children to be banished from New York City, and they settle in the only town that will offer Dan employment: Waring, North Carolina. There, in the Bible belt of America, Serena becomes enmeshed with the small Jewish congregation in town led by an esoteric rabbi, whose increasingly erratic behavior threatens the future of his flock. Dan and their young son are drawn into the Boy Scouts by their mysterious and vigilant neighbor, who may not have their best intentions at heart. Tensions accrue when matters of faith, identity, community, and family all fall into the crosshairs of contemporary, small-town America. A Town of Empty Rooms presents a fascinating insight into the lengths we will go to discover just where we belong.

Karen E. Bender is the author of the novel Like Normal People and A Town of Empty Rooms, and her story collection, Refund, is forthcoming from Counterpoint Press. Her short stories have appeared in magazines including The New Yorker, Granta, Narrative, Ploughshares, Zoetrope, and The Harvard Review and anthologized in Best American Short Stories, Best American Mystery Stories, New Stories from the South, and won two Pushcart Prizes.
or
Not Currently Available for Direct Purchase
Copyright © 2020 American Booksellers Association