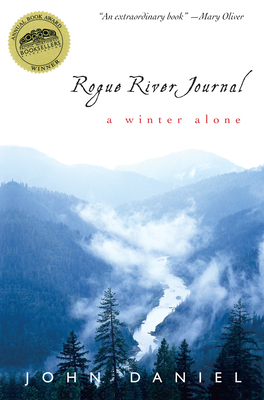 In November of 2000, after the presidential election but before the final results had been handed down by the Supreme Court, John Daniel climbed into his pickup, drove to a remote location in Oregon's Rogue River Canyon, and quit civilization. The strictures were severe with no two–way human communication — not even with his wife — and no radio, no music, not even his cat. He would isolate himself in a cabin sure to be snowed in soon after his arrival, intent on hearing no human voice but his own until spring thawed the road. This experiment in solitude was an attempt to clarify his identity while pursuing daily life without the distractions of the world at large. Daniel had spent a week or two alone before, but this would be an entirely new challenge, and as he drove off into the mountains he felt a fear–tinged freedom. Rogue River Journal chronicles his journey in solitude, a season of memory, and his search for a coherent place to stand on the earth.

John Daniel's books of prose, including Rogue River Journal and The Far Corner, have won three Oregon Book Awards for Literary Nonfiction, a Pacific Northwest Booksellers Award, and have been supported by a fellowship from the National Endowment for the Arts among other grants and awards. His essays and poems have appeared in Wilderness Magazine, Orion, Sierra, Terrain.org, The North American Review, Poetry, The Southern Review, and other journals and anthologies. A former Wallace Stegner Fellow and Jones Lecturer at Stanford University, he has taught as a writer–in–residence at colleges and universities across the country. Earlier in life he was a logger, hod carrier, railroader, and rock–climbing instructor. Daniel lives with his wife, Marilyn Daniel, in the Coast Range foothills west of Eugene, Oregon.
Loading...
or
Not Currently Available for Direct Purchase