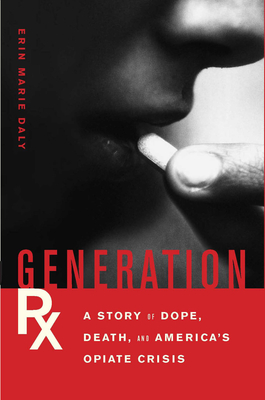 A Story of Dope, Death, and America's Opiate Crisis

As the opiate epidemic takes an increasingly strong hold on American families, Erin Daly's investigation into what happened to her younger brother is as important as ever. What had happened to my baby brother? How did a tiny little pill shatter our family?When did we first begin losing Pat?These are the harrowing questions that plagued Erin Marie Daly after her youngest brother Pat, an OxyContin addict, was found dead of a heroin overdose at the age of twenty. In just a few short years, the powerful prescription painkiller had transformed him from a fun-loving ball of energy to a heroin addict hell-bent on getting his next fix. Erin set out on a painful personal journey, turning a journalistic eye on her brother's addiction; in the process, she was startled to discover a new twist to the ongoing prescription drug epidemic. That kids are hooked on prescription drugs is nothing new; what is new is how a generation of young people playing around with today's increasingly powerful opioids are finding themselves in the frightening grip of heroin. With a new introduction and updated notes, Generation Rx explores what the opiate epidemic is doing to our youth, and just how inextricably tied OxyContin and Heroin really are.

Erin Marie Daly worked for five years as a senior reporter for Law360, where she covered the pharmaceutical industry and product liability litigation. In 2012, she was awarded the Sigma Delta Chi Award for Excellence in Journalism in the Online Reporting category from the Society for Professional Journalists. She was also nominated for a GLAAD Media Award for Outstanding Digital Journalism in 2007. Daly has reported in countries such as India, Bosnia, and Russia. With an MA in cultural reporting and criticism from New York University, her freelance feature writing has appeared in a myriad of publications.
or support indie stores by buying on
Copyright © 2020 American Booksellers Association