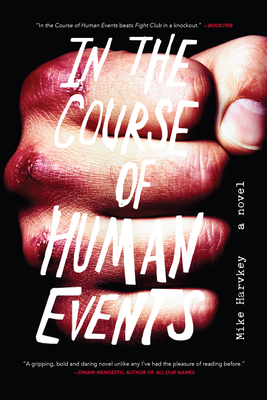 In the Course of Human Events

This thrilling debut novel--equal parts satire and morality play--shines a sharp light on the dark and radical underbelly of the floundering American Midwest.

Clyde Twitty could use a break, a helping hand. He's a young man lost--in his finances, in his family--and stuck deep within the fast-settling muck of a dwindling rural Missouri town that has, in every way, given up hope. The hand that reaches down, lifts him up, and leads him forward belongs to a fiercely charismatic patriarch named Jay Smalls, a man who exerts a kind of gravitational force--and breeds fierce purpose in those who find themselves caught in it.

Not rattled by the increasingly sinister racial undertones of Jay and his posse, and desperate to look forward and not down, for once in his life, Clyde hardly stumbles when the path he's being ushered down takes a dark and irrevocable turn. As he plunges us into the violent spiral of a desperate youth, he explores with unflinching acuity the ugly nature of hate, the untempered force of personality, and the sometimes horrific power of having someone believe in you.

Mike Harvkey grew up in rural northwest Missouri, near the city of Independence, a crystal meth stronghold long before Breaking Bad. When he moved to New York in 2001 to attend Columbia’s Creative Writing MFA Program as a Bingham Fellow, he began training Kyokushin, a brutal form of martial art known for bare-knuckle fighting, and was promoted to black belt in 2006. One of his short stories won Zoetrope All-Story Magazine’s short fiction contest; others have been published in Mississippi Review and Alaska Quarterly Review.
Loading...
or
Not Currently Available for Direct Purchase