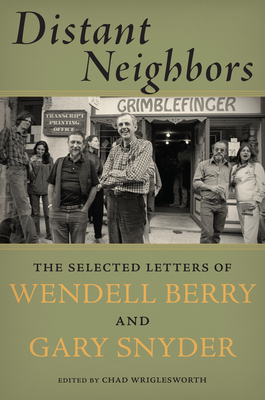 "The letters are valuable for ecologists, students, and teachers of contemporary American literature and for those of us eager to know how these two distant neighbors networked, negotiated, and remained friends." —San Francisco Chronicle

"In Distant Neighbors, both Berry and Snyder come across as honest and open–hearted explorers. There is an overall sense that they possess a deep and questing wisdom, hard earned through land work, travel, writing, and spiritual exploration. There is no rushing, no hectoring, and no grand gestures between these two, just an ever–deepening inquiry into what makes a good life and how to live it, even in the depths of the machine age."—Orion Magazine

In 1969 Gary Snyder returned from a long residence in Japan to northern California, to a homestead in the Sierra foothills where he intended to build a house and settle on the land with his wife and young sons. He had just published his first book of essays, Earth House Hold. A few years before, after a long absence, Wendell Berry left New York City to return to land near his grandfather's farm in Port Royal, Kentucky, where he built a small studio and lived there with his wife as they restored an old house on their newly acquired homestead. In 1969 Berry had just published Long–Legged House. These two founding members of the counterculture and of the new environmental movement had yet to meet, but they knew each other's work, and soon they began a correspondence. Neither man could have imagined the impact their work would have on American political and literary culture, nor could they have appreciated the impact they would have on one another.

Snyder had thrown over all vestiges of Christianity in favor of becoming a devoted Buddhist and Zen practitioner, and had lived in Japan for a prolonged period to develop this practice. Berry's discomfort with the Christianity of his native land caused him to become something of a renegade Christian, troubled by the church and organized religion, but grounded in its vocabulary and its narrative. Religion and spirituality seemed like a natural topic for the two men to discuss, and discuss they did. They exchanged more than 240 letters from 1973 to 2013, remarkable letters of insight and argument. The two bring out the best in each other, as they grapple with issues of faith and reason, discuss ideas of home and family, worry over the disintegration of community and commonwealth, and share the details of the lives they've chosen to live with their wives and children. Contemporary American culture is the landscape they reside on. Environmentalism, sustainability, global politics and American involvement, literature, poetry and progressive ideals, these two public intellectuals address issues as broad as are found in any exchange in literature.

No one can be unaffected by the complexity of their relationship, the subtlety of their arguments, and the grace of their friendship. This is a book for the ages.

"The letters are valuable for ecologists, students and teachers of contemporary American literature and for those of us eager to know how these two distant neighbors networked, negotiated and remained friends." —San Francisco Chronicle

"Distant Neighbors: the Selected Letters of Wendell Berry and Gary Snyder…showcases these two great American poet–philosophers at most thoughtful and least guarded. Decades of correspondence drill down through the layers of their concerns – land use, economics, farming, wild nature, the life of the spirit, modernity itself – as they struggle to live within a culture tearing itself up by its roots." —Paul Kingsnorth's pick for one of New Stateman's Books of the Year

"Both poets and essayists have written extensively on ecology and our relationship with the natural environment. But their correspondence reveals as many points of difference – of opinion, of region, of background – as similarity, and lively and thoughtful dialogue on many topics, along with fellowship and a reverence for art and authenticity, is the result." –NPR

"Make no mistake: the melding and morphing of ideas that editor Chad Wriglesworth brings to the pages of Distant Neighbors will, for most readers, be the main appeal of the book. But these small, more literally grounded concerns, the tiny details of a day spent in Henry County, Kentucky, or in the foothills of the Sierras, are shining threads in the cloth of this long, good friendship. It's news like Berry's one spring — that he and his wife Tanya have "three rows in the garden and 35 lambs" — or Snyder's enthusiastic recommendation of his sister's book on the chicken farms of Petaluma, that keeps the two writers tethered to the warp and woof of their shared sense of place and time. Over and over in these pages the authors rise up to the big, mythical arenas of human existence, then float back down to the simple comforts of the mundane. Such is the feast that feeds them. And as a reader of these letters, it's hard not to feel terribly fortunate to be seated at the table." —Gary Ferguson, author of The Carry Home, in Los Angeles Book Review

"In Distant Neighbors, both Berry and Snyder come across as honest and open–hearted explorers. There is an overall sense that they possess a deep and questing wisdom, hard earned through land work, travel, writing, and spiritual exploration. There is no rushing, no hectoring, and no grand gestures between these two, just an ever–deepening inquiry into what makes a good life and how to live it, even in the depths of the machine age." —Orion Magazine

Wendell Berry is the author of fifty books of poetry, fiction, and essays. He was recently awarded the Cleanth Brooks Medal for Lifetime Achievement by the Fellowship of Southern Writers and the Louis Bromfield Society Award. For over forty years he has lived and farmed with his wife, Tanya, in Kentucky.

Gary Snyder is the author of more than twenty collections of poetry and prose. Since 1970 he has lived in the watershed of the South Yuba River in the foothills of the Sierra Nevada. Winner of the Pulitzer Prize in 1975, Snyder has also been awarded the Bollingen Prize for Poetry and the Robert Kirsch Lifetime Achievement Award. His 1992 collection, No Nature, was a National Book Award finalist, and in 2008 he received the Ruth Lilly Poetry Prize. Snyder is a poet, environmentalist, educator and Zen Buddhist.
Loading...
or
Not Currently Available for Direct Purchase