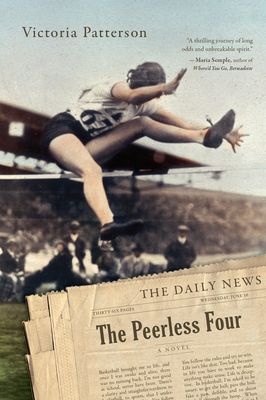 Running so hard you think you'll choke on your next breath. Lungs burning like they're drenched in battery acid. Peripheral vision blurred by the same adrenaline that drowns out the cheers coming from the full stadium. And of course, the reporters. The men scribbling furiously on their notepads so they can publish every stumble, sprain, and sniffle in these historic games.

This was the world of the female athletes in the 1928 Amsterdam Olympics, the first games in which women were allowed to compete (and on a trial basis, at that). Nicknamed "the Peerless Four," the Canadian track team included some of the strongest and most diversely talented women on the scene. Narrated by the team's chaperone—a former runner herself—the women embark on their journey with the same golden goals as every other Olympian, male or female. But as the Olympic tension begins to rise with unexpected injuries, heartbreaking disqualifications, and the pressure of supreme athletic performance, each woman discovers new fears and new priorities, all while the weight of women's future in the Olympics rests on their performance poise.

The Peerless Four is more than a sports novel, more than a record of how far women's rights have come in the past 75 years. It's a meditation on sacrifice, loyalty, commitment, perseverance, and the courage to live a true underdog tale.

Praise For The Peerless Four: A Novel…

"[F]ascinating story . . . Patterson mates genres—sports and period fiction—and the result is surprisingly rich and resonant . . . the author not only transcends categories but creates something poignant and memorable."—Publishers Weekly

"Stirring historical fiction and a great choice for book clubs."—Booklist

"The Peerless Four is a fascinating exploration of a little known chapter in sports history. With gorgeous, restrained prose and a crystalline eye for detail, Victoria Patterson takes us on a thrilling journey of long odds and unbreakable spirit." —M aria Semple, author of Where'd You Go, Bernadette

"The grittiest, booziest, toughest sports novel I've read in recent years is written by a woman—about women! In The Peerless Four, Patterson compels and entertains with prose perfectly fitted to this lean, surprising, unsentimental tale of female Olympiads in the late 1920s." —Jonathan Evison, author of The Revised Fundamentals of Caregiving

Victoria Patterson is the author of the novel The Peerless Four. She also wrote This Vacant Paradise, selected as an Editor's Choice by The New York Times Book Review. Drift, her collection of interlinked short stories, was a finalist for the California Book Award and the 2009 Story Prize. The San Francisco Chronicle selected Drift as one of the best books of 2009. Her work has appeared in various publications and journals, including the Los Angeles Times, Alaska Quarterly Review, and the Southern Review. She lives with her family in Southern California and teaches at the Antioch University's Master of Fine Arts program and as a Visiting Assistant Professor at UC Riverside.
Loading...
or support indie stores by buying on