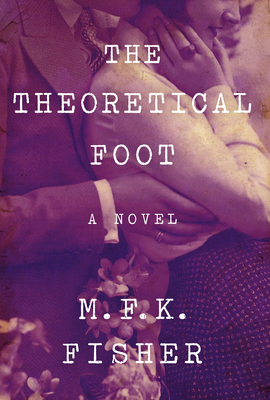 When Robert Lescher died in 2012 an unpublished manuscript of M.F.K. Fisher's was discovered neatly packed in the one of the literary agent's signature red boxes. Inspired by Fisher's affair with Dillwyn Parrish — who was to become her second husband — The Theoretical Foot is the master stylist's first novel. In it she describes the life she all–too–briefly had with the man she'd ever after describe as the one great love of her life.

It tells of a late–summer idyll at the Swiss farmhouse of Tim and Sara, where guests have gathered at ease on the terrace next to the burbling fountain in which baby lettuces are being washed, there to enjoy the food and wine served them by this stylish American couple.

But all around these seemingly fortunate people, the forces of darkness are gathering: The year is 1939; World War II approaches. And the paradise Tim and Sara have made is being besieged from within as Tim — closely based on Parrish — is about to suffer the first of the circulatory attacks that will cause him to lose his leg to amputation.

Praise For The Theoretical Foot…

"This previously unpublished autobiographical first novel by the acclaimed food writer presents a snapshot of a certain slice of American expat life in Switzerland in the late 1930s, all sumptuous feasts and sun–dappled terraces."—NatGeo Traveler

"If I were still teaching high–school English, I'd use [Fisher's] books to show how to write simply, how to enjoy food and drink but, most of all, how to enjoy life. Her books and letters are one feast after another." —Frank McCourt

"She writes about fleeting tastes and feasts vividly, excitingly, sensuously, exquisitely. There is almost a wicked thrill in following her uninhibited track through the glories of the good life." —James Beard

"M.F.K. Fisher is our greatest food writer because she puts food in the mount, the mind and the imagination all at the same time. Beyond the gastronomical bravura, she is a passionate woman; food is her metaphor." —Shana Alexander

Mary Frances Kennedy Fisher, as M F. K. Fisher was the preeminent American food writer. She wrote thirty-three books, including a translation of The Physiology of Taste by Jean Anthelme Brillat-Savarin. Her first book, Serve It Forth, was published in 1937. Fisher's books are an amalgam of food literature, travel, and memoir.
Loading...
or
Not Currently Available for Direct Purchase