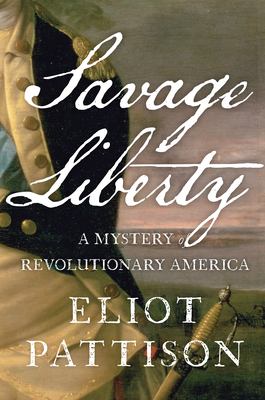 Following a tortuous path of sabotage and treason, exiled Scotsman Duncan McCallum must survive his enemies long enough to glimpse the emergence of the American Revolution in this thrilling Publishers Weekly Best Mystery of the Year.

When a ship arriving from London explodes in Boston Harbor, both the peace of the colonial city and Duncan McCallum’s life are shattered. Summoned by John Hancock to a beach awash with the bodies of the victims, Duncan discovers that the ship was sabotaged. Hancock refuses to let him take evidence to the authorities, for this is 1768 and relations with the government are sour.

Fearing that the intrigues of Hancock and the Sons of Liberty might set the colonies ablaze, Duncan relentlessly pursues the truth, only to be falsely charged with treason and murder. With the help of Ethan Allen, aged natives, and outlawed Jesuits, he survives scalp hunters, imprisonment, and his own spiritual crisis, only to realize he cannot resolve the terrible crimes until he first understands the emerging truths about freedom in the American colonies.

A Publishers Weekly Best Mystery of the Year

“Pattison has few peers when it comes to integrating historical events into a complex but plausible whodunit plot.” —Publishers Weekly (starred and boxed review)

“For those who enjoy politics, history, and hairbreadth escapes swirled together.” —Library Journal

“This fifth entry in Pattison's Bone Rattler series advances McCallum's personal life as it exhibits the seamless blend of fiction and history that distinguishes this fine series. A timely reminder, as well, of what liberty meant to our forebears.” —Booklist

“Prepare to be immersed in this story of early America . . . This is historical writing at its best, with plenty of action and suspense. It's difficult to put down.” —Historical Novel Society

“A passionate and intelligent tale of the American revolutionary period and a decent murder mystery to boot. Savage Liberty is a page–turning thriller with a deeply researched and beautifully authentic backdrop. An absorbing story with memorable scenes and characters . . . A thoroughly entertaining read.” —Nudge Books

Praise for the Bone Rattler Series

“The Last of the Mohicans meets Braveheart, with a curious dash of CSI.” —Entertainment Weekly

“If this were a movie, we'd marvel at the set decoration that splendidly evokes the period. The excellent prose narrative goes right to the matter in question, the state of the (pre–Colonial) human heart.” —Chicago Tribune

“Pattison's moving characters, intricate plot and masterful evocation of the time, including sensitive depictions of the effects of the European war of Native Americans, set this leagues beyond most historicals and augur well for future entries in this series.” —Publishers Weekly (starred review)

Eliot Pattison is the author of the Inspector Shan series, which includes The Skull Mantra, winner of an Edgar Award and finalist for the Gold Dagger. He is also the author of the the Bone Rattler series, featuring Scotsman Duncan McCallum. Pattison resides in rural Pennsylvania with his wife, son, three horses, and three dogs on a colonial-era farm. Find out more at eliotpattison.com.
Loading...
or support indie stores by buying on