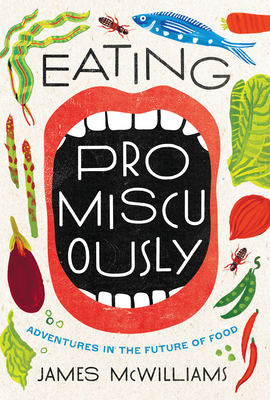 Adventures in the Future of Food

"The need to reexamine assumptions about how we feed ourselves becomes ever more important. McWilliams does not shy from imagining radical solutions to these issues . . . Sure to be controversial." ―Booklist The human practice of farming food has failed. There are 7,500 known varieties of domesticated apples; we regularly eat about five. Seventy-five percent of the world's food derives from five animals and twelve plants. Factory farmed meat is a major source of greenhouse gas emissions (about 14 percent, larger than transportation) and consumes 75 percent of the water in drought-prone regions such as the West. We are stuck in a rut of limited choices, and the vast majority of what we eat is detrimental to our health and the welfare of the planet. But what if we could eliminate agriculture as we know it? What if we could start over? James McWilliams's search for more expansive palate leads him to those who are actively exploring the fringes of what we can eat, a group of outliers seeking nutrition innovation outside the industrial food system. Here, we meet insect manufacturers, seaweed harvesters, road kill foragers, plant biologists, and oyster farmers who seek to open both our minds and our mouths--and to overturn our most basic assumptions about food, health, and ethics. Eating Promiscuously generates hope for a more tasteful future--one in which we eat thousands of foods rather than dozens--with a new philosophy that could save both ourselves and our planet. "The author's overriding assumption is that it would be better for people, animals, and the environment if our diets were more diversified. Hundreds of plants and protein sources, he rightly notes, are overlooked in favor of a narrow range of food . . . McWilliams presents a solid argument." --Kirkus Reviews

James McWilliams is an historian and writer based in Austin, Texas. He is the author of seven books, including The Modern Savage: Our Unthinking Decision to Eat Animals, Just Food: Where Locavores Get It Wrong and How We Can Truly Eat Responsibly, and A Revolution in Eating: How the Quest for Food Shaped America. His essays on food, animals, and agriculture--as well as several literary topics--have appeared in The New Yorker, The New York Times, The Paris Review, Harper's, The Atlantic, Slate, Modern Farmer, The American Scholar, The New York Times Book Review, The Washington Post, The Millions, and Pacific Standard, where he is a contributing writer.
or support indie stores by buying on
Copyright © 2020 American Booksellers Association