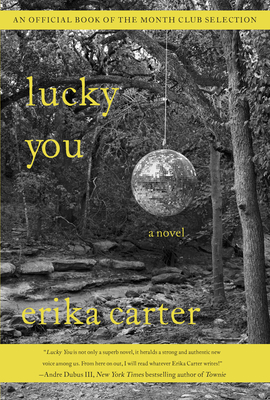 An NPR Best Book of 2017 An official Book of the Month Club selection Three women, early twenties, find themselves aimlessly adrift in Erika Carter's fierce and darkly funny debut novel, Lucky You. Ellie, Chloe and Rachel are friends (sort of); waitresses at the same tired bar in the Arkansas college town they've stuck around in too long. Each is becoming unmoored in her own way: Ellie obliterates all feeling with alcohol and self-destructive acts of sexual promiscuity; Chloe pulls out patches of her hair and struggles to keep incipient mental illness at bay; changeable Rachel has fallen under the sway of a messianic boyfriend with whom she's agreed to live off-grid for a year in order to return to "health" and asks Ellie and Chloe to join them in "The Project". In a remote, rural house in the Ozarks, nearly undone by boredom and the brewing tension between them, each tries to solve the conundrum of being alive. By turns funny, knowing and hauntingly sad, Lucky You delivers the kind of study in damage and detachment that made Mary Gaitskill's Bad Behavior or Joan Didion's Play It As It Lays so memorable. With startling exactitude and wickedly deadpan humor, it lays bare the emotional core of its characters with surgical precision. The writing is deft and controlled, as natural and unforced as breath--which makes it impossible to look away.

Erika Carter's work has appeared in the Colorado Review, Meridian, CutBank, and the South Carolina Review, among other literary journals and magazines. She lives in Richmond, Virginia, with her husband, the artist Rob Carter.
Loading...
or support indie stores by buying on