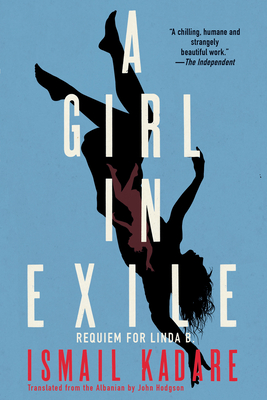 A Girl in Exile

Requiem for Linda B.

A New York Times Book Review Editors' Choice
"Erotic, paranoiac and lightly fantastical." --The Wall Street Journal
"Ismail Kadare's readers are astonished every year when the Nobel committee overlooks him. . . . A Girl in Exile, published in Albanian in 2009, may rekindle the worldwide hopes." --The New York Times Book Review
During the bureaucratic machinery of Albania's 1945-1991 dictatorship, playwright Rudian Stefa is called in for questioning by the Party Committee. A girl--Linda B.--has been found dead, with a signed copy of his latest book in her possession.
He soon learns that Linda's family, considered suspect, was exiled to a small town far from the capital. Under the influence of a paranoid regime, Rudian finds himself swept along on a surreal quest to discover what really happened to Linda B.
"At a time when parts of the world are indulging nostalgia for communism, Kadare's novel confronts the infuriating impossibility of art in an autocratic, anti-individualist system." --The Washington Post
"A Girl in Exile confirms Kadare to be the best writer at work today who remembers--almost aggressively so, refusing to forget--European totalitarianism." --The New Republic

Ismail Kadare is Albania's best-known novelist and poet. Translations of his novels have appeared in more than forty countries. He was awarded the inaugural Man Booker International Prize in 2005, the Jerusalem Prize in 2015, and the Neustadt International Prize for Literature in 2020. John Hodgson studied at Cambridge and Newcastle and has taught at the universities of Prishtina and Tirana. This is the sixth book by Ismail Kadare that he has translated.
Loading...
or support indie stores by buying on