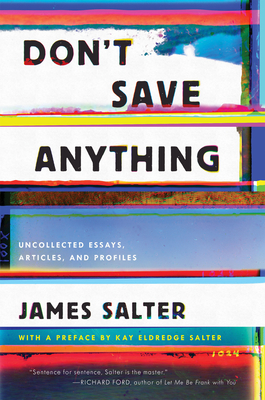 "In Don't Save Anything . . . Kay Eldredge Salter assembles her late husband's bread-and-butter journalism--yet how delicious good bread and butter can be . . . As always, Salter emphasizes simple, vivifying details." --Michael Dirda, The Washington Post One of the greatest writers of American sentences in our literary history, James Salter's acute and glimmering portrayals of characters are built with a restrained and poetic style. The author of several memorable works of fiction--including Dusk and Other Stories, which won the PEN/Faulkner Award--he is also celebrated for his memoir Burning the Days and many nonfiction essays. In her preface, Kay Eldredge Salter writes, "Don't Save Anything is a volume of the best of Jim's nonfiction--articles published but never collected in one place until now. Though those many boxes were overflowing with papers, in the end it's not really a matter of quantity. These pieces reveal some of the breadth and depth of Jim's endless interest in the world and the people in it . . . One of the great pleasures in writing nonfiction is the writer's feeling of exploration, of learning about things he doesn't know, of finding out by reading and observing and asking questions, and then writing it down. That's what you'll find here." This collection gathers Salter's thoughts on writing and profiles of important writers, observations of the changing American military life, evocations of Aspen winters, musings on mountain climbing and skiing, and tales of travels to Europe that first appeared in The New Yorker, Esquire, People, Cond Nast Traveler, the Aspen Times, among other publications.

JAMES SALTER was a novelist, short story writer, screenwriter, and essayist. Born in 1925, Salter grew up in New York City and was a career officer and Air Force pilot until his mid-thirties, when the success of his first novel The Hunters led to a fulltime writing career. Salter's potent, lyrical prose has earned him acclaim from critics, readers, and fellow novelists. He was the recipient of a PEN/Faulkner Award and the PEN/Malamud Award, among others. His novel A Sport and a Pastime was hailed by the New York Times as "nearly perfect as any American fiction." His other books include Cassada and Light Years. He died on June 19, 2015, at ninety years old.
Loading...
or support indie stores by buying on