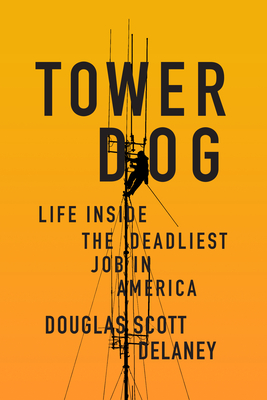 Life Inside the Deadliest Job in America

An insider's look at the rough and tumble workers throughout America who are risking their lives--and losing them at an alarmingly high rate--all in the name of connectivity.

What is the price of staying connected, of that phone in your hand or that watch on your wrist?

In Tower Dog: Life Inside the Deadliest Job in America, Douglas Scott Delaney, a tower dog for more than fifteen years, draws readers into this dark and high-stakes world that most don't even know exists, yet rely on every minute of every day. This risk-laden profession has been covered by NBC Dateline, Frontline, The Wall Street Journal, and The Washington Post, but none of these reports have provided the real, inside story of these men and women who have always lived on the edge of society; a fascinating mix of construction crews and thrill-seekers. Delaney is a brash and illuminating guide, and Tower Dog gives us the real experience of what it's like for the workers balanced precariously above the clouds.

Praise For Tower Dog: Life Inside the Deadliest Job in America…

"I was totally compelled by this . . . the writing is strong; in the tradition of Junger, Langwiesche, Krakauer . . . with a dash of Hunter S. Thompson.” —Jon Winokur, author of bestselling memoirs The Garner Files and But Enough About Me

A vivid book guaranteed to make readers more aware of what it takes to get that cellphone signal into his or her hand, for better or worse." —Kirkus Reviews

"Delaney’s descriptions of working on broadcast towers document fatigue (90-hour weeks) and fear (of gravity’s heartlessness) and reverberate with bravado . . . Delaney’s book promotes appreciation for those who risk their lives so we can get a cell-phone signal, and it just might provoke some acrophobia, too." —Booklist

Douglas Scott Delaney is an award-winning and produced playwright and screenwriter. He has done development work with Fox Searchlight and Columbia Pictures, among many others, and has done production work for both TV and film. His one produced film, All Roads Lead Home, won Best Picture at the Los Angeles International Film Festival in 2007. His short fiction has been published in Kansas Quarterly, Prism International and Western Humanities Review. His drama has been performed in theaters all over the United States. Delaney was born in Brooklyn, New York, and raised in Levittown, Long Island. He now lives in the Kansas Flint Hills, where he is "at least a quarter mile from anyone who could aggravate me, and vice versa." He has been a tower dog since 1997.
Loading...
or support indie stores by buying on