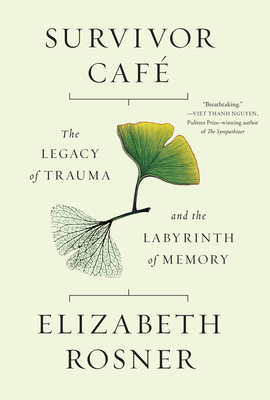 "Survivor Café . . . feels like the book Rosner was born to write. Each page is imbued with urgency, with sincerity, with heartache, with heart.... Her words, alongside the words of other survivors of atrocity and their descendants across the globe, can help us build a more humane world." —San Francisco Chronicle

As firsthand survivors of many of the twentieth century's most monumental events—the Holocaust, Hiroshima, the Killing Fields—begin to pass away, Survivor Café addresses urgent questions: How do we carry those stories forward? How do we collectively ensure that the horrors of the past are not forgotten?

Elizabeth Rosner organizes her book around three trips with her father to Buchenwald concentration camp—in 1983, in 1995, and in 2015—each journey an experience in which personal history confronts both commemoration and memorialization. She explores the echoes of similar legacies among descendants of African American slaves, descendants of Cambodian survivors of the Killing Fields, descendants of survivors of the bombing of Hiroshima and Nagasaki, and the effects of 9/11 on the general population. Examining current brain research, Rosner depicts the efforts to understand the intergenerational inheritance of trauma, as well as the intricacies of remembrance in the aftermath of atrocity. Survivor Café becomes a lens for numerous constructs of memory—from museums and commemorative sites to national reconciliation projects to small–group cross–cultural encounters.

Beyond preserving the firsthand testimonies of participants and witnesses, individuals and societies must continually take responsibility for learning the painful lessons of the past in order to offer hope for the future. Survivor Café offers a clear–eyed sense of the enormity of our twenty–first–century human inheritance—not only among direct descendants of the Holocaust but also in the shape of our collective responsibility to learn from tragedy, and to keep the ever–changing conversations alive between the past and the present.

Praise For Survivor Café: The Legacy of Trauma and the Labyrinth of Memory…

“Mixing the personal with the historical and the literary with the scholarly, Rosner achieves a breathtaking overview of events as varied as the Holocaust, the Vietnam War, the Rwandan genocide, and Japanese American internment. Her impressive, highly readable Survivor Café takes on important issues of atrocity, trauma, and memory, rendering them all with such great clarity and intimacy that the reader will not soon forget them, or this powerful book.” —Viet Thanh Nguyen, Pulitzer Prize–winning author of The Sympathizer

“Rosner’s memoir, which combines moving personal narrative with illuminating research into the impact of mass trauma on a personal and cultural scale, is imbued with urgency, sincerity, heartache, and heart.” —San Francisco Chronicle, 1 of 100 Best Books of 2017

“There’s been a slew of research examining the genetic effects of psychological trauma, but author Elizabeth Rosner is among the first to take a deep dive into the personal implications of such inheritance with her stunning new book, Survivor Café: The Legacy of Trauma and the Labyrinth of Memory.” —Orange County Register

“Survivor Café is a beautifully expressed personal examination of how trauma is passed down through generations...An exquisite read.” —The Daily Gazette

“This is a personal exploration for Rosner, but also an exploration of the commonalities found in the children of survivors.” —Read it Forward

“Survivor Café is an exercise in mapmaking, in identifying convergent paths in apparently disparate legacies left by the world’s humanitarian disasters . . . [Rosner] asks us to look inside ourselves, to learn from the past, to forgive, and to understand the deep connections binding us to our past, our future, and to all other things.” —Lilith Magazine

“Rosner demonstrates a rare blend of scholarly assessment and personal revelation, tempering her singular passion with an encompassing mercy. In this important and vital contribution to the conversation about legacy and responsibility, Rosner distills the magnitude of such burdens and defines the scope of memorialization with an elegance and eloquence that reverberates with both depth and nuance.” —Booklist (starred review)

“A thoughtful, probing meditation on the fragility of memory and the indelible inheritance of pain.” —Kirkus Reviews

“Novelist Rosner (Electric City) shines an unblinking light on the most horrific of 20th–century crimes and asks: What is the intergenerational legacy of trauma? . . . She considers art, anniversaries, memorials, and psychotherapy, but the most powerful technique she finds for dealing with trauma is simply telling the story behind it . . . Themes of memory, language, and the bodily imprint of trauma are powerful, as are Rosner’s accounts of revisiting Buchenwald with her father . . . Rosner's conclusions—that powerful suffering must be communicated before healing can occur and that the most profound of human atrocities must be acknowledged so that their like does not happen again—open the door to understanding and, optimistically, show a path to peace.” —Publishers Weekly

“This is the book that clinicians and patients alike have been waiting for. Rosner seamlessly integrates the latest research on intergenerational trauma with her own deeply moving personal account. The result is a true advancement in the field, a must–read that is rich, accessible, compelling, and informative.” —Joshua Simmons, Psy.D., Clinical Psychologist and Candidate in Analytic Training at the C.G. Jung Institute of San Francisco

“Using her experiences as a child of Holocaust survivors, [Rosner] navigates the audience through the realms of epigenetics, psychotherapy, history, and philosophical struggles to bring something unique to the study of trauma . . . These personal recollections provide a dimension that softens some of the most indigestible theories and concepts that we have come to associate with memory, psychology, psychoanalysis, trauma, and history . . . paving the way for future studies.” —Ellis Spicer, Reviews in History, Institute of Historical Research

“In Survivor Café, Elizabeth Rosner brilliantly captures both the enormity of war and its enduring aftershocks—the devastating legacies for victims, perpetrators, and societies who suffer through and beyond it. A mixture of history, personal narrative, and research, the book expertly documents how atrocities are passed down through generations and how we may find ways to contain this pernicious inheritance. Survivor Café is a vital, living document that proves the end of war is far from the end of the battle.” —Andrew Carroll, editor of the New York Times bestsellers War Letters and Behind the Lines

“Using the Holocaust as a focal point, Survivor Café renders a profound and unflinching portrait of trauma and the memory of trauma, the consequences of inhumanity, atrocities that do not end with one generation but are inherited as nightmare, memory, and affliction, passed on to the next generation and the next and the next. With vivid stories and brilliant insights, this book must be required reading for those who want to understand not just our collective history but the present moment.” —Susan Griffin, award–winning author of A Chorus of Stones

Elizabeth Rosner is the author of three novels and a poetry collection. The Speed of Light was translated into nine languages and won several awards in the US and in Europe, including being shortlisted for the prestigious Prix Femina. Blue Nude was named among the best books of 2006 by the San Francisco Chronicle. Electric City was named among the best books of 2014 by NPR. Her essays and reviews have appeared in the New York Times Magazine, Elle, the San Francisco Chronicle and others. She lives in Berkeley, CA.

1. Some insist that the Holocaust is a unique historical event that cannot be discussed alongside any other genocide, before or since. Others emphasize that a shared endeavor to remember and study the Holocaust, including the examination of other atrocities, is key to developing a sense of collective responsibility for the past as well as the future. What are some of the reasons for these different points of view?

2. How do you understand the various goals of memorialization and commemoration? In what ways might these efforts be incompatible and yet also intertwined? Do you feel there is an effective way to distinguish between the past and the present?

3.  What are some of examples of “inadequate language” that you have encountered in your own life, and/or in your field of work or education? What are some of the most problematic words and phrases you have heard used, or found yourself using, and why are they challenging for you?

4. Are you aware of stories in your family and/or your community that you have never heard, but wish you could find out about? Why do you think these stories have remained hidden, or at least have not yet been told?

5. Do you or your family members have certain possessions that have come to represent the history of your ancestors? Is there any object or item that doesn’t necessarily have monetary value but which has been a cherished keepsake for generations? Choose one of those objects and tell its story.

6. In what ways do you observe the inheritance of trauma in your own family and/or culture? It may take the form of silence, or absence. Are there experiences you have had that are unspeakable? Do you believe that experiences must be named in order to be understood?

7. This book interweaves numerous individual as well as collective narratives of violence and loss, war and its long-lasting aftermath. Is there any particular story related in Survivor Café that seemed to have the most powerful effect on you, whether emotionally or intellectually or even physically? Can you talk about why you felt so impacted?

8. Do you feel that your education has included enough breadth as well as depth in the study of genocide and atrocity, past and present? If you were to choose one aspect of Survivor Café to use as a springboard for learning more, what would that subject be? What do you still want to know?