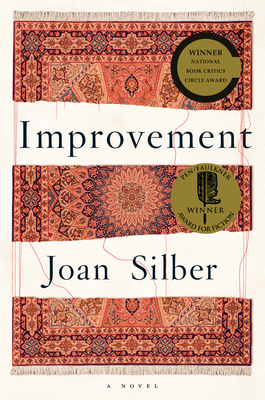 “This is a novel of richness and wisdom and huge pleasure. Silber knows, and reveals, how close we live to the abyss, but she also revels in joy, particularly the joy that comes from intimate relationships . . . [A] perfectly balanced mix of celebration and wryness.” —The New York Times Book Review

“The gorgeous though damaged Turkish rug that adorns the dust jacket of Joan Silber’s Improvement is a fitting symbol for this exceptional novel, and not just because one of its subplots concerns carpet dealing. Ms. Silber is a weaver of disparate lives . . . With Improvement she has created her most vibrant tapestry of what she wryly calls 'the ever–expanding joke of human trouble' . . . Improvement is forthright and funny about the blinkered muddle humankind makes for itself. Yet its vibrating web of interconnection is hopeful and beautiful.” —The Wall Street Journal

“[I]t feels vital to love Silber’s work . . . Now is the moment to appreciate that she is here, in our midst: our country’s own Alice Munro . . . Like Grace Paley and Lucia Berlin, she’s a master of talking a story past its easiest meaning; like Munro, a master of the compression and dilation of time, what time and nothing else can reveal to people about themselves. She has an American voice: silvery, within arm’s length of old cadences, but also limber, thieving, marked by occasional raids on slang and jargon, at ease both high and low, funny, tenderhearted, sharp. It gives her the rare ability to reach the deepest places in the plainest ways.” —The Washington Post

“Such is Silber’s expertise that it requires no more than a paragraph, or even a couple of sentences, to involve us in the next one, and the next . . . Silber’s superb handling of time . . . draws the disparate lives into a unity, and makes this compressed novel feel mysteriously capacious.” —Anthony Quinn, The Guardian

“If your must–read this month is a love–and–loss story seasoned with single motherhood and smuggling schemes, National Book Award finalist Joan Silber's Improvement hits the sexy sweet spot from page one.” —Elle Magazine

“This gorgeously written novel, funny and full of heart, follows several characters in the life of Reyna, a tattooed single mom with a rambunctious son, a boyfriend in Rikers, and a wise aunt who has seen it all. Each chapter tells a story. I loved every one of them.” —The Seattle Times

“Some books make evangelists of critics, and Silber’s eighth book is one of them. Written with minimalist mastery and maximum feeling, the novel circles a number of characters linked—sometimes closely, sometimes not—to Reyna, a tattooed single mom in New York. What do we want out of life? How do we hold on to love? How do we get over it? Silber, a writer’s writer who deserves a wider audience, explores big questions with subtlety, humor, and compassion. 'Improvement is an everyday masterpiece,' writes reviewer Tom Beer.” —Newsday

“Silber’s extraordinary new novel . . . is kaleidoscopic as it spans decades and stretches from New York to Berlin and Turkey. Her wildly different characters intersect, and as she subtly details the quotidian stuff of life, she raises questions about fate and chance, power and redemption, and, finally, the universal need for connection.” —The National Book Review

“Her work generates tension and momentum from the ebbs and flows of individual lives, but also from the unexpected and sometimes unexplained links between them . . . Like the Turkish carpet that drives much of the book’s action, Improvement repeats shapes and motifs, layering them in an intricate pattern that builds into something far more complex than the sum of its parts . . . Part of Silber’s gift is knowing which stories not to tell. Her prose is spare, devoid of flourishes and extraneous information . . . It is both tragic and infuriating that a writer [like Joan] as innovative, humane, and wise is not read more widely.” —The New York Review of Books

“The prose serenely glides over irreversible, defining moments and how differently characters deal with the curveballs life throws at them . . . Improvement is a meditation on the space of time and distance and certain defining events change people and propel them to re–calibrate their priorities in life . . . The prose eloquently evinces human emotions—love and heartbreak, regret and loss, guilt and redemption . . . Improvement reads like fragmented character studies of a disparate group of people, intricately woven together by chance and fate. Exquisitely woven, this is a rich tapestry of human conditions.” —Chicago Review of Books

“Silber weaves together character studies that examine love, money (and how to get it,) and the ripple effects of choices made. Silber’s decision to write events of great magnitude from everyday points of view lends realism and universality to her story. Fans of character–driven, literary fiction should be on the lookout for Improvement.” —Booklist

“The subtle ripple effects of individual choices and actions are eloquently portrayed through Silber's penetrating eye in this elegant and thought–provoking novel.” —Library Journal

“A new book by Joan Silber is a grand event in American literature. Silber has been creating a unique body of work that, in its immense authority and vision, puts her in the company of Alice Munro and Mavis Gallant. Improvement is a novel that explores love and ambition and the way it entangles, wounds, transforms vibrant characters across New York City, Virginia, Turkey, and Germany. This is a magnificent work about the complexity of human connection, full of remarkable insight and compassion.” —Karen E. Bender, author of Refund, a finalist for the National Book Award

“I love all of Joan Silber's work for her mastery of character, her ferocious and searching compassion, and her elegant lines that make the mind hum for hours. Improvement is so crisp and resonant a novel that it made me forget the chaos of life around me; a feat for which I'm truly grateful.” —Lauren Groff, author of Fates and Furies