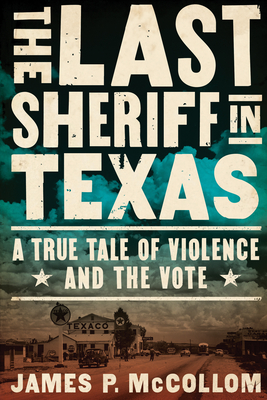 The Last Sheriff in Texas

A True Tale of Violence and the Vote

An Amazon Best History Book of the Month
A] narrative with resonance well beyond seekers of Texas history. The Last Sheriff in Texas would be an amazing allegory for our times, were it fiction. Instead it suggests cultural trenches that we view as new that were dug decades ago. --Houston Chronicle
Beeville, Texas, was the most American of small towns--the place that GIs had fantasized about while fighting through the ruins of Europe, a place of good schools, clean streets, and churches. Old West justice ruled, as evidenced by a 1947 shootout when outlaws surprised popular sheriff Vail Ennis at a gas station and shot him five times, point-blank, in the belly. Ennis managed to draw his gun and put three bullets in each assailant; he reloaded and shot them three times more.
Time magazine's full-page article on the shooting was seen by some as a referendum on law enforcement owing to the sheriff's extreme violence, but supportive telegrams from all across America poured into Beeville's tiny post office. Yet when a second violent incident threw Ennis into the crosshairs of public opinion once again, the uprising was orchestrated by an unlikely figure: his close friend and Beeville's favorite son, Johnny Barnhart.
Barnhart confronted Ennis in the election of 1952: a landmark standoff between old Texas, with its culture of cowboy bravery and violence, and urban Texas, with its lawyers, oil institutions, and a growing Mexican population. The town would never be the same again.
The Last Sheriff in Texas is a riveting narrative about the postwar American landscape, an era grappling with the same issues we continue to face today. Debate over excessive force in law enforcement, Anglo-Mexican relations, gun control, the influence of the media, urban-rural conflict, the power of the oil industry, mistrust of politicians and the political process--all have surprising historical precedence in the story of Vail Ennis and Johnny Barnhart.

James P. McCollom is the author of The Continental Affair: The Rise and Fall of the Continental Illinois Bank. A native son of Beeville, Texas, he has worked as a banker and business executive in the Northeast before settling back in his hometown.
Loading...
or
Not Currently Available for Direct Purchase