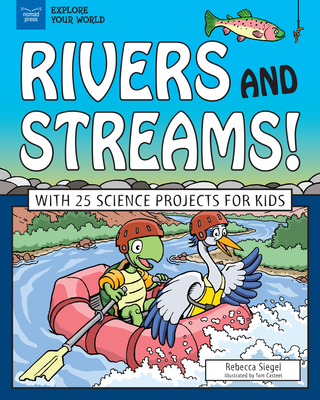 With 25 Science Projects for Kids (Explore Your World)

Why are rivers and streams important to life on Earth?

Did you know that without rivers, human life might not have developed as it did? We might be a very difference species if it wasn't for rivers, as would the other plants and animals who depends on rivers and streams for food, transportation, water, and power

In Rivers and Streams With 25 Science Projects for Kids, readers ages 7 to 10 dive in and discover how rivers change the shape of the land while plants, animals, and humans change the shape of rivers. Through fun facts, engaging content, and essential questions, kids learn about the vital role that rivers and streams have played in human history and explore the ways rivers and streams might affect our future. Science experiments that promote critical thinking and creative problem solving encourage kids to make their own discoveries about the waterways they might pass every day.

Talking about earth science means talking about climate change. How are rivers affected by our changing climate, and what can we do to help rivers and streams stay healthy in their changing environment? Rivers and Streams encourages kids to think creatively as they search for actionable solutions to the problems faced by today's waterways.

Student-led STEAM projects that promote the use of the scientific method, such as investigating a local watershed, looking for life in water samples, modeling how insects walk on water, and making a water wheel, let kids get their hands wet and their minds working as they make real-life connections to the text. Fun facts, engaging illustrations, links to primary sources, timeline, glossary, and resources make this a terrific introduction to one of earth's most important resources--rivers and streams

Rivers and Streams is part of a set of four Explore Waterways books from Nomad Press. In the Explore Waterways set, readers ages 7 to 10 learn about the waterways of our world, including the what, where, how, and who about the origination, content, and aquatic life that water contains. Through science-minded STEAM projects and experiments that encourage readers to think of waterways as part of a larger ecosystem, kids develop critical and creative thinking skills about the role waterways play in our world.

Rebecca Siegel is a writer and editor who has written about topics from computers to medicine, from bread and cheese making to printing, and from navigation applications to goat milk soap. She is happiest when she's learning and writing about something new. Rebecca lives in Thetford, Vermont, along the west branch of the Ompompanoosuc River, which runs from the valley below her house to the Connecticut River. Tom Casteel is an illustrator and cartoonist with a master's degree from the Center for Cartoon Studies. Tom has illustrated several books for Nomad Press, including Explore Ancient Chinese Myths! With 25 Great Projects and The Oregon Trail: The Journey Across the Country from Lewis and Clark to the Transcontinental Railroad. He is working on his first graphic novel.
Loading...
or
Not Currently Available for Direct Purchase