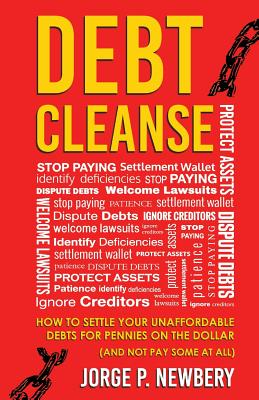 Jorge Newbery erased his debts without filing bankruptcy. Now you can, too. Like many Americans, Newbery struggled with debt. But unlike most people, he owed more than $26 million.

Creditors swarmed after a natural disaster devastated his multi-million dollar business. The stress was crushing. He needed a way out -- and what he discovered will amaze you.

His breakthrough came practically by accident. One of his creditors made a sloppy legal mistake, and he battled the creditor all the way to the Missouri Court of Appeals. The court ruled that the entire debt -- nearly $6 million -- was "inadvertently extinguished." It didn't have to be paid. It was completely eliminated.

Newbery applied the powerful techniques he had learned to all his other debts. The results were astonishing. One after another, his debts were either settled or gone forever.

Debt Cleanse shows you how to gain leverage over your creditors. You can settle your unaffordable debts for pennies on the dollar - and not pay some at all. Don't let your debt burden you one more day.

This book will set you free.