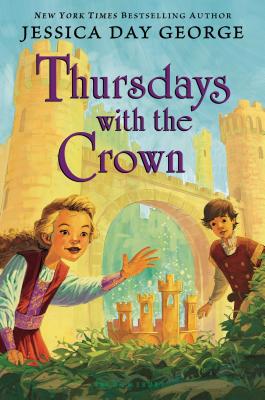 Thursdays with the Crown (Tuesdays at the Castle)

Castle Glower has been acting weird, so it's no surprise when two towers transport Celie and her siblings to an unknown land. When they realize that no one from home is coming to get them, the kids--along with Celie's pet griffin Rufus--set out through the forest to figure out where they are and what's happened to their beloved Castle. Instead, they discover two wizards and an entire lost people, the oldest inhabitants of Castle Glower. And it seems they may know more of the Castle's secrets than Celie. But do they know how to get her back home?


Praise For Thursdays with the Crown (Tuesdays at the Castle)…

“Lovely and engaging, this fantasy series continues to have wide appeal . . . Fans should be eager for this origin revealing follow-up.” —Booklist

“Fans of the series will eagerly devour this latest installment.” —School Library Journal

“This enjoyable romp turns mischief into political action and a stone palace into a cunning character. . . . These kids are clever, as is George's adventure. May pique castle envy.” —Kirkus on Tuesdays at the Castle

“This story puts an unexpected spin on the typical princess tale. Readers will root equally for crafty Celie and for her castle, a truly unique and memorable 'pet.'” —Library Media Connection on Tuesdays at the Castle

“Castle Glower is the true star of this charming story of court intrigue and magic. A satisfying mix of Hogwarts and Howl's Moving Castle, Castle Glower helps its true citizens, but never at the expense of plot or character development. . . . Adventure stories fans will enjoy this as much as children who wear their wizard cloaks proudly.” —School Library Journal on Tuesdays at the Castle

“There is a warmth here that is utterly irresistible, both in Celie as the plucky, resourceful protagonist . . . and the maternal, protective nature of her guardian castle. Furthermore, Celie's devotion to her older brother and sister is appealing, and it's refreshing to see siblings who get along despite their differing personalities.” —BCCB on Tuesdays at the Castle

“A sweet, funny, sincere story in which siblings work together.” —Kirkus Reviews on Wednesdays in the Tower